UN Photo/Mark Garten
John Ging, Operations Director for the UN Office for the Coordination of Humanitarian Affairs (OCHA) briefs the press. At left is Stéphane Dujarric, spokesperson for the Secretary-General.
5 May 2015

Beset by multiple crises themselves, Niger and Chad are making heroic efforts to cope with the impact of the turmoil swirling around them, but the international community is failing in its responsibility to share the burden, a senior official for the United Nations Office for the Coordination of Humanitarian Affairs (OCHA) said today.

Briefing reporters at UN Headquarters in New York after his return from the two countries, OCHA Operations Director John Ging noted that between them, Chad and Niger host more than 850,000 refugees and returnees from neighbouring countries.

“These two countries constitute a fragile island of stability in a region of conflict. Impoverished as they are, they show us their exemplary humanity in opening their borders to hundreds of thousands of refugees fleeing their war-torn neighbours: Nigeria, Central African Republic, Mali, Libya and Sudan,” said Mr. Ging.

“While these two countries languish at the very bottom of the Human Development Index, they lead the world in their generosity and in their humanity,” said Mr. Ging. “I witnessed people in some of the world’s poorest communities open their homes and share the very little they have with those in need. It is truly humbling, and an inspiring example in a world where humanity is in short supply.”

“Of the many countries I have visited over the past year, Niger and Chad offer the clearest examples showing that urgent action is required to meet basic needs and shore up stability to prevent these fragile countries from tipping into crisis,” said Mr. Ging.

Niger is ranked last on the UN’s Human Development Index, while Chad falls fourth from last. 2.4 million people in Chad and 2.6 million in Niger are food insecure. Niger’s population, with two thirds of its citizens aged under 25, is one of the fastest-growing in the world, and the population is set to double every 18 years, expected to reach 200 million in 2050 from 18 million currently.

“While it is critical that lifesaving assistance continues for those in desperate need, what is also needed is to support these countries in building a more hopeful future for their people, investing in education, job creation and public infrastructure,” said OCHA’s Operations Director. “This is important not only for the people of Niger and Chad, but for the long term stability of this troubled region.”

Both countries’ humanitarian appeals are woefully underfunded, at 17 per cent for Chad and 25 per cent for Niger, and contributions are declining both in absolute terms and as a proportion of need year-on-year.

♦ Receive daily updates directly in your inbox - Subscribe here to a topic.
♦ Download the UN News app for your iOS or Android devices.
niger|chad 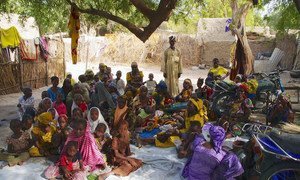 The members of the United Nations Security Council condemned today in the strongest terms the spate of recent terrorist attacks perpetrated by Boko Haram in northeast Nigeria and Chad.