UNICEF CAR
This little boy is not even 5 years old and he is already enrolled in an armed group. UNICEF and partners are working to release him and several thousand other kids in the Central African Republic (CAR).
5 May 2015

Christophe Boulierac, briefing on behalf of UNICEF, said CAR was one of the worst places in the world for children, especially after the last two years of violence. The leaders of armed groups agreed not only to release between 6,000 and 10,000 children but also to stop future enrolment and to grant UNICEF immediate and restriction-free access to any zone under the groups’ control.

He explained that the agreement took place under the auspices of the National Reconciliation Forum trying to re-establish peace in the country. The gathering, known as the Bangui Forum, after the war-torn country’s capital, is bringing together leaders of armed groups as well as religious leaders, members of Government and Parliament for discussions on maintaining peace and is considered a crucial step in the reconciliation process and in preparing the ground for a constitutional referendum and parliamentary and presidential elections.

At the opening of the Forum, which is expected to run through 11 May, the Special Representative of the Secretary-General for the Central African Republic, Babacar Gaye, who also heads the Multidimensional Integrated Stabilization Mission in the country (MINUSCA), expressed the Secretary-General’s hope and confidence that parties would show the “will to make the Forum a success.”

In his address, Mr. Gaye advised parties to work in an atmosphere of forgiveness, and he called for dialogue and consensus-building in the Forum’s negotiations and an agreement that would see free, fair democratic and transparent elections tale place that are open to all, including refugees and displaced persons.

The commitment made by armed groups after preliminary discussions with the Government on 23 April to take part in the Forum fuelled hope in the international community, he said, emphasizing the need for disarmament and for formation of a professional and representative national army.

“It is time for the guns fall silent in this country,” Mr. Gaye said. “We, the international community, are and will remain with you on the road to peace.” 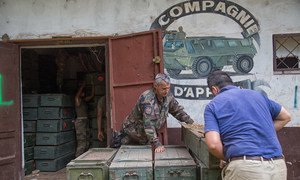 The United Nations is proceeding with its investigation of the events surrounding the release to a third party of an internal report on allegations of sexual misconduct by French military personnel in the Central African Republic (CAR), a spokesperson for the Organization has confirmed.