UNICEF/Mohammed Hamoud
Two boys sit amid belongings on the roof of a vehicle fleeing Sana’a, the capital of Yemen.

5 May 2015
The conflict in Yemen has now taken at least 646 civilian lives and injured more than 1,300 others, according to UN human rights monitors who also drew attention today to the desperate plight of persons with disabilities who are facing increasing difficulties in meeting their basic needs.

“There has also been severe destruction of civilian infrastructure, including houses, in many districts” of Yemen, said spokesperson Ravina Shamdasani for the Office of the UN High Commissioner for Human Rights (OHCHR).

Figures from 26 March up to 3 May from the field show that at least 646 civilians have been killed, including 50 women and 131 children, and more than 1,364 civilians have been injured, Ms. Shamdasani told reporters at a press briefing at UN headquarters in Geneva.

“We reiterate that all suspected violations of international human rights law and humanitarian law during the conflict should be investigated, and that the intentional targeting of civilians not taking direct part in the hostilities should be immediately stopped,” she said.

The human rights spokesperson also drew particular attention to the plight of persons with disabilities in Yemen – some 3 million people “who are facing serious protection concerns and increasing difficulties in meeting their basic needs.”

“Those who use wheelchairs have limited or no access to public or private transport facilities due to fuel shortages and high fuel prices across the country,” she said. “As a result, some people with disabilities and their families have been unable to flee to safe areas.”

In recent days, UN human rights monitors have documented the destruction of a number of civilian houses, reportedly belonging to individuals affiliated with the Houthis, by airstrikes, she said.

“In one incident,” she said, “on 1 May, at least 17 civilians were killed, including four children and nine women, and 27 civilians were injured as a result of an airstrike that allegedly targeted the home of a Houthi leader in the Sa’wan area of the capital, Sana’a City. Residents reported that they had believed their homes were safe as there were no military locations nearby.”

In the war-torn seaside city of Aden, at least 22 civilians were killed in two separate incidents in the past week, according to the OHCHR spokesperson.

“And we are particularly concerned about airstrikes which hit a military field hospital in Damnat Khadeer District, 40 kilometres north of Taiz,” she said. “UN human rights field monitors were denied access to the site, so it has been difficult to verify the death toll and establish who the victims were.” 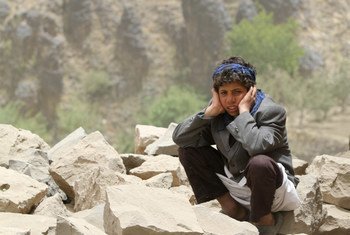 4 May 2015
The aid operation in Yemen cannot meet the life-saving needs of people unless humanitarians are assured safe and reliable access to the capital’s international airport, the United Nations relief coordinator for the country said today, calling it an “essential lifeline.”