UNICEF/Mohammed Hamoud
A boy sits amid rubble, all that remains of his home, which was destroyed in an air strike in Okash Village, near Sana’a, the capital of Yemen.
4 May 2015

The aid operation in Yemen cannot meet the life-saving needs of people unless humanitarians are assured safe and reliable access to the capital’s international airport, the United Nations relief coordinator for the country said today, calling it an “essential lifeline.”

“Without access to the airports, aid agencies are unable to bring in staff, vital supplies of medicines and other critical life-saving assistance, or undertake medical evacuations of their personnel,” said Johannes van der Klaauw in a press statement.

According to the UN Office for the Coordination of Humanitarian Affairs (OCHA), coalition airstrikes have targeted the runways at Sana’a international airport over the past week, rendering them inoperable. No flights can take-off or land while the runways are being repaired.

More than 1,200 people have been killed and 300,000 have fled their homes in nearly two months of fighting in the war-torn Gulf nation. Emergency relief and medical teams from abroad are struggling to fly in to scale-up the humanitarian operation to address the needs of increasingly vulnerable Yemenis.

“I strongly urge the coalition to stop targeting Sana'a international airport and to preserve this important lifeline – and all other airports and seaports – so that humanitarians can reach all those affected by the armed conflict in Yemen,” the Humanitarian Coordinator said.

In its latest update on Yemen, OCHA said that the conflict, insecurity and shortage of fuel continue to hinder the delivery of urgently needed assistance to displaced families and other vulnerable, conflict-affected communities.

Insecurity and lack of fuel have limited access to and delivery of services. Partners report difficulty providing medical services as result of the current security situation and continued airstrikes targeting Haradh, Sa’ada and Sana’a. Food partners have reported they have had to suspend assistance in several districts due to lack of fuel.

Casualties and the number of displaced continue to rise. In Aden, where violence has continued, local authorities report that 98 per cent of Khormaksar district’s 62,869 residents had left and that remaining families are trapped and awaiting secure conditions to leave. Mass displacement is also taking place in Al Muala and Aden City.

In Aden, local sources report continued widespread violence. Local sources report that several districts are without electricity, water and telecommunications for over a week and on 3 May had been blocked in order to prevent supplies from entering.

Efforts are underway by UN agencies and partners to bring new and urgently needed supplies to the country, but the security situation is severely hampering those measures. Yemen imports almost 90 percent of its basic food from abroad. The political situation in Yemen has deteriorated since the country formed a new Government in November 2014. 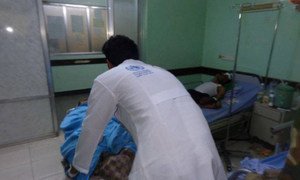