UNICEF/NYHQ2015-1110/Panday
Indu Maharjan and her four-year old daughter Neisha walk back to their makeshift shelter on the grounds of a chicken farm in Bungamati, Kathmandu Valley.
4 May 2015

The global humanitarian community is fighting against the clock as it delivers critical relief to Nepal’s most devastated communities, a top United Nations official said today as she urged international donors to step up their support.

“We’ve achieved a lot already but we must do much more. That’s why we’re bringing in more trucks and helicopters and working together with more partners to get help where it’s needed – not just food, but shelter too,” World Food Programme (WFP) Executive Director, Ertharin Cousin, said as she concluded her three-day visit to the landlocked nation’s earthquake-affected regions where relief efforts are ongoing despite numerous challenges.

“An operation of this scope and complexity requires more financial support to see this through,” she added.

On 25 April, a 7.8 magnitude earthquake shook Nepal, killing thousands while limiting access to food and leaving some 3.5 million in need of food assistance. An estimated 8 million people across the country’s Western and Central Regions are affected by the disaster, including its largest cities, Kathmandu and Pokhara.

Just over a week after the quake hit, the WFP is providing assistance to survivors in some of the hardest-hit areas of Nepal, including Dhading, Gorkha, Nuwakot, Rasuwa and Sindhupalchok districts. The agency has reported that enough food has been dispatched so far for 250,000 people, and more people will be assisted in coming days.

Nevertheless, the situation on the ground remains dire.

Although damage to the agriculture sector has not yet been fully assessed, affected families have likely lost livestock, crops, food stocks and valuable agricultural inputs, according to the UN. The disaster has also destroyed markets and infrastructure, including roads and crucial irrigation and drainage canals. As a result, internal trade, including the movement of emergency aid, is severely constrained.

Before the earthquake hit, UN’s Food and Agriculture Organization, also known as FAO, estimated Nepal’s wheat production in 2015 at 1.8 million tonnes. But crop damage and farmers’ inability to harvest in earthquake-affected areas are likely to change this forecast.

In addition, Ms. Cousin noted, the coming monsoon season means that “the clock is ticking” for relief efforts.

The Executive Director’s visit comes on the heels of the WFP’s urgent $116.5 million appeal aimed at providing food for 1.4 million people over the next three months. The UN agency, which is funded entirely by contributions from governments, companies and individuals, also needs an additional $34 million to provide common logistics and telecommunications services for the humanitarian community.

“We must operate efficiently and expeditiously to help people who’ve lost everything. We can see that food isn’t the only need right now,” she continued. “People also need immediate shelter. That's why we're supporting our partners by also bringing in shelter items where we can.” 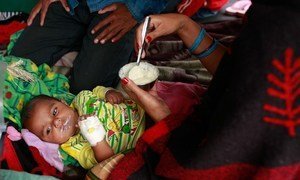