UNICEF/Chandra Shekhar Karki
Akriti Tamang, 8, searches for her books amid the rubble and ruins of her destroyed home, in Sangachowk Village, Sindhupalchowk District, one of the areas worst affected by the massive earthquake in Nepal.
2 May 2015

Wrapping up their visit to Nepal, the United Nations and European Union aid chiefs stressed that while relief teams are working around the clock to assist the thousands of people affected by the devastating earthquake that struck the tiny Himalayan nation one week ago today, aircraft and helicopters are urgently needed, as are emergency shelters, particularly for people in hard-hit rural areas.

On the last day of their visit they met with Prime Minister Sushil Koirala, and reaffirmed the commitment of the international community to support the country in this time of crisis.

“My thanks to the Prime Minister for his clear message on the importance of working in partnership to speed up aid delivery,” said Ms. Amos, who is also the UN Emergency Relief Coordinator. “I assured him of the international community's strong commitment to provide the necessary support.”

For his part, Mr. Stylianides said that a disaster of such magnitude would test the capacities of any government in the world. “The Nepalese people can rest assured that we will stand by them, Nepal is not alone in this crisis.”

During their visit, the UN and EU aid officials witnessed the devastation caused by the 7.8 magnitude earthquake that struck a week ago and met with people who were directly affected.

They also had an opportunity to meet those on the front lines of the relief effort, including search and rescue (SAR) teams, medical professionals, and aid workers. Ms. Amos and Mr. Stylianides also met with senior representatives of local and national authorities, as well as financial and technical partners.

Seven days into the relief operation, a significant amount of national and international aid and responders are being used. Teams are working around the clock to reach those affected. Helicopters and aircraft are particularly needed to reach those in the most remote areas.

The UN and EU aid chiefs repeatedly stressed the urgent need to provide emergency shelter to hundreds of thousands of people, particularly in the rural areas. This is especially important given the fast approaching monsoon season. Healthcare and sanitation are also priorities.

Meanwhile, the UN Children's Fund is (UNICEF) warning that the health and wellbeing of children affected by the disaster are hanging in the balance – as many have been left homeless, in deep shock and with no access to basic care. With the monsoon season only a few weeks away, children will be at heightened risk of diseases like cholera and diarrhoeal infections, as well as being more vulnerable to the threat of landslides and floods.

“The earthquake has caused unimaginable destruction,” said Rownak Khan, UNICEF Deputy Representative in Nepal. “Hospitals are overflowing, water is scarce, bodies are still buried under the rubble and people are still sleeping in the open. This is a perfect breeding ground for diseases.”

UNICEF is broadening its response so that children in the most severely affected communities, including those in hard-to-reach areas beyond Kathmandu, are provided with lifesaving services and supplies.

"We have a small window of time to put in place measures that will keep earthquake-affected children safe from infectious disease outbreaks – a danger that would be exacerbated by the wet and muddy conditions brought on with the rains," said Ms. Khan. “That's why it's so crucial to get essential medicine, medical equipment, tents and water supplies out to these areas now.”

OCHA – the UN relief wing headed up by Ms. Amos – has launched a joint humanitarian response plan alongside other UN agencies and partners in an effort to support Government-led efforts in addressing the most critical needs of millions of people in need of shelter, water and sanitation, emergency health, food, and protection for the next three months.

A $415 million emergency appeal, which was jump-started with $15 million made available through the UN Central Emergency Response Fund (CERF), will help partners provide emergency shelter to 500,000 people who remain in the open, braving the damp and cold weather. Emergency health services and medical supplies and facilities, and safe drinking water and sanitation facilities are also urgently needed for up to 4.2 million people.

To date, some $68 million was provided in support of the ongoing response, according to OCHA. 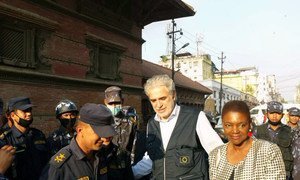 Emergency funding for relief efforts are streaming into Nepal as the country begins to recover from last Saturday’s devastating earthquake, the top United Nations humanitarian official said today as she urged the international community to increase its support for the landlocked Himalayan nation.