The United Nations World Health Organization (WHO) today said that surveillance and community engagement still require improvement in some areas of Guinea and Sierra Leone where new cases continued to surface, a day after the new Special Representative for UN Ebola Response, Peter Graff, was informed of a continued transmission epicentre on the border between those two countries.

Mr. Graff joined outgoing Special Representative Ismail Ould Cheikh Ahmed, and the Secretary-General’s Special Envoy on Ebola, David Nabarro, on a visit to Freetown, Sierra Leone, during which they were briefed by the National Ebola response Centre (NERC) on efforts to achieve zero transmission.

“They were informed that Kambia District was still a transmission epicentre due in part to it neighbouring Forécariah in Guinea, which continues to record a high number of Ebola cases,” the UN Mission for Ebola Emergency Response (UNMEER) reported.

UNMEER also reported that efforts were underway to strengthen collaboration with Guinea in different areas, including in sharing information as well as making using of the laboratory in Kambia for Ebola testing of suspected cases in Guinean border towns.

Meanwhile, WHO issued its weekly update today, stating that 33 confirmed cases of Ebola virus disease (EVD) were reported in West Africa in the week that ended on 26 April. Two areas, Forécariah in Guinea and Kambia in Sierra Leone, accounted for 25 or 76 percent of all confirmed cases reported.

“In both Guinea and Sierra Leone, the fact that cases continue to be identified after post-mortem testing, together with the fact that around half of all cases arise in people not identified as contacts of previous cases, suggest that surveillance and community engagement still require improvement in some areas,” WHO reported.

Liberia reported no confirmed cases for the fifth consecutive week, according to WHO. Of 55 districts in Guinea, Liberia, and Sierra Leone that have reported at least one confirmed case of Ebola since the start of the outbreak, 39 have not reported a case for over six weeks.

To date, more than 26,000 people have been affected by Ebola in West Africa, including more than 10,000 deaths. 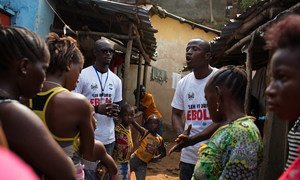 With fresh statistics on the Ebola outbreak reflecting a halt in the decline in West Africa, the United Nations today began a campaign to engage more women – who have been disproportionately affected by the disease – as well as local traditional healers, to encourage communities to become more involved to bring down infection rates to zero.