UNICEF/Abdrew Esiebo
A woman and her children in a camp for internally displaced persons, in Yola, the capital of Adamawa, Nigeria, after members of the Boko Haram rebel group attacked their home.
29 April 2015

The United Nations Special Envoy for Global Education, Gordon Brown, has welcomed the release of 200 girls from captivity by Boko Haram and called for the immediate release of all abducted girls, ahead of his meeting tomorrow with Nigerian President-Elect.

“It is time to end the nightmare,” said Mr. Brown, who will have talks with Nigerian President-Elect Muhammadu Buhari tomorrow about the missing girls.

Some 276 girls were abducted by Boko Haram from their school in Chibok, located in Nigeria’s restive north-eastern Borno state, in April 2014, as the militant group ramped up brutal attacks targeting the African country’s children.

“I will talk to President-Elect Buhari tomorrow about how the international community can provide air and military help to free the girls. And I will also offer help for safe schools which allow girls to participate in education, free of fear,” he added.

“For a year families have not known whether their daughters are dead or alive, married off, sold off or violated as a result of their captivity,” the Global Education Envoy emphasized.

“Now that some girls have been released we want all girls released. And we want them home with their families in days - not months or years,” Mr. Brown urged.

Since Boko Haram began targeting schools and children, hundreds of thousands of children have been displaced from their homes and deprived of their rights to live and grow up in safety and peace.

“We need more secure, better prepared, safe schools to make girls and parents know everything is being done to protect them,” Mr. Brown emphasized.

“Today 10 million children don’t go to school in Nigeria,” Mr. Brown said. “By creating safe schools and communities where girls are free of fear we can get every child into school and learning.”

According to the UN Children’s Fund (UNICEF), more than 300 schools were damaged or destroyed and at least 196 teachers and 314 schoolchildren killed by the end of 2014 as a result of the conflict in northeast Nigeria between Boko Haram and military forces. 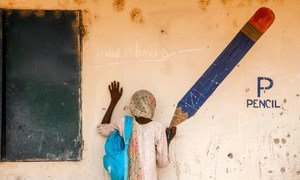 A new report released by the United Nations Children’s Fund (UNICEF) reveals that least 800,000 children have been forced to flee their homes as a result of the conflict in northeast Nigeria between Boko Haram, military forces and civilian self-defence groups.