Somalia in 2014 exported a record five million livestock to markets in the Gulf of Arabia thanks to heavy investments in animal disease prevention backed by the European Union and the United Kingdom, the United Nations Food and Agriculture Organization (FAO) said today.

This is the highest number of live animals exported from Somalia in the last 20 years.

The FAO data indicates that Somalia exported 4.6 million goats and sheep, 340,000 cattle and 77,000 camels in 2014, worth an estimated $360 million. Livestock is the mainstay of the Somali economy, contributing 40 per cent to the country’s gross domestic product (GDP).

“This shows that despite the challenges, the Somali people are successfully working to improve their economy and food security,” said Richard Trenchard, head of FAO’s office for Somalia. “FAO and our partners are committed to remaining engaged and involved in supporting those efforts.”

Buyers from Saudi Arabia, Yemen, Oman, Kuwait, Qatar and United Arab Emirates have all taken advantage of Somalia’s thriving livestock scene and its improved disease surveillance and control mechanisms. Saudi Arabia, in particular, has contributed to steadily rising exports over the last six years, following a move to lift a nine-year ban on the import of livestock from Somalia.

Transboundary animal diseases have been a major concern because they can kill large numbers of animals, resulting in food shortages, market disruptions and trade and export barriers.

Every year, FAO vaccinates an average of 12 million animals in Somalia against peste des petits ruminants (PPR) – a highly contagious and often deadly viral disease of goats. Another 12 million goats are treated and vaccinated every year against Contagious Caprine Pleuropneumonia (CCPP), a source of major losses among Somali livestock producers.

“There is no doubt that livestock is, and will remain for a long time, central to the Somali economy,” said Mr. Trenchard.

Continued investment in building Somali livestock institutions is key to boosting incomes, reducing the vulnerability of rural households, and steering the future growth of the sector, according to Mr. Trenchard, who says the livestock sector is at a tipping point.

In May 2015, FAO will start training 150 Somalis in curing leather, a potentially lucrative opportunity for the entire livestock sector, while an EU-funded programme is underway to improve milk quality in northwestern Somalia, one of the country’s main milk production regions.

The 2014 figures represent an optimum level of live animal export for Somalia, according to FAO experts, who urge producers to shift focus towards export of meat and other by-products.

A livestock certification system developed by FAO along the Galkayo-Bossaso livestock corridor will further help to ensure high quality livestock for local consumption and export. 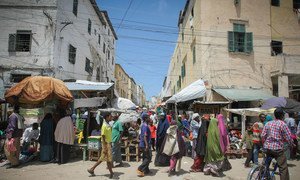 The top United Nations official in Somalia condemned yesterday a terrorist attack against the Ministry of Culture and Higher Education in Mogadishu city that resulted in the death and injuries of civilians, members of the security forces and Government workers.