Amid an upsurge in violence in Mali, the top United Nations official there today warned parties about the serious consequences their actions could have on the country’s peace process.

“I urge the parties to immediately cease hostilities and to return to their positions. This resurgence of tensions imperils everybody’s efforts to restore lasting peace in Mali,” said Mongi Hamdi, the Secretary-General’s Special Representative and head of the UN Stabilization Mission in Mali (MINUSMA).

At around noon today, MINUSMA was informed about an attack conducted by GATIA and MAA-Plateforme in the town of Ménaka, which is currently held by elements of the Coordination des Mouvements de l’Azawad (CMA). Shots were heard and MINUSMA deployed helicopters to assess the situation, according to a statement released by the mission.

“Early this morning, near Timbuktu, MINUSMA vehicles were targeted outside the city by the CMA. There were no casualties. The CMA have indicated to us that this was an error on their part, and demand the departure of FAMa,” Mr. Hamdi said.

“These two events are extremely worrying as they endanger the peace process. We are currently establishing the facts,” added the envoy, who met on 26 April with representatives of the CMA, who reaffirmed their full commitment to the ongoing peace process.

“Months of intensive negotiations involving all parties to put an end to the crisis in Mali could be endangered. These actions constitute serious violations of the ceasefire agreements, which were also reaffirmed in the declaration of 19 February 2015,” he continued.

Mr. Hamdi also pointed to the statement by the President of the Security Council on 6 February, which suggested that appropriate measures would be considered, including the imposition of targeted sanctions against those who resume hostilities and violate the ceasefire.

“I therefore call for calm and reason to prevail for the benefit of all Malians. The crisis that has shaken Mali will only be resolved through dialogue. I remain convinced that all parties will demonstrate wisdom and reason to sign a historic peace agreement,” he said.

The ceasefire agreements signed by the parties foresee that they stay in their positions during the negotiations and that they abstain from any action – direct or indirect – that would undermine the prospects for peace. MINUSMA, which is completely impartial, insists that these commitments be respected by all.

The MINUSMA teams on the ground are completely committed to ending this “very worrying spiral of tensions as quickly as possible,” Mr. Hamdi said, calling for calm to give dialogue and peace a chance.

“I regret the turn of events, but I remain optimistic regarding the chances of seeing the peace process successfully concluded next month. There is no alternative to the signing of the peace agreement.”

In recent years, Mali has been confronted by a crisis with serious political, security, socio-economic, humanitarian and human rights consequences. The crisis stems from long-standing structural conditions such as weak State institutions, ineffective governance, deep-seated feelings among communities in the north of being marginalized and the effects of environmental degradation, climate change and economic shocks. 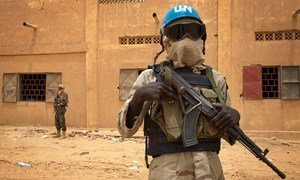 Secretary-General Ban Ki-moon has voiced deep concern over a series of attacks targeting the United Nations Stabilization Mission in Mali (MINUSMA) which have resulted in numerous casualties, a statement issued by a UN spokesperson said today.