<a href=http://bit.ly/1DkyNIl>Mathieu Galtier/IRIN</a>
Migrants at a detention centre in the city of Zawiya, Libya.
28 April 2015

The heads of United Nations agencies with a stake in the current crisis in the Mediterranean Sea have pledged to working closely with the European Union (EU) following its decision “to mobilize all efforts at its disposal to prevent further loss of life at sea and to tackle the root causes of the human emergency.”

Noting that “the Council’s decision is an important first step towards collective European action,” the officials said: “We look forward to working closely with EU and other stakeholders to expand and enhance the measures announced, with a view to setting in place a more holistic plan consistent with international norms and standards.”

Responding to a series of deadly shipwrecks since mid-April that has focused global attention on the risks refugees and migrants are willing to take to reach Europe, EU leaders met in Brussels last week to discuss a strategy to address the crisis, including through the proposed doubling the size of its Mediterranean search and rescue operations.

Meanwhile, the Office of the UN High Commissioner for Refugees reported that it and its partners have been able to help some of the 1,242 people picked up in Libyan waters and mostly taken to immigration detention centres since mid-April.

In their joint statement, the UN agency heads and the IOM chief reminded the European Union that “efforts to deter smuggling will be in vain unless measures are adopted to address overly restrictive migration policies in Europe, as well as the push factors of conflict, human rights violations and economic deprivation in many of the countries of origin and transit.”

“Law enforcement measures must be accompanied by efforts aimed at reducing the need for migrants and refugees to turn to smugglers in the first place,” the statement read. “The situation today calls for measures going beyond border security.”

The agency officials said they are drawing up plans to increase their support in a number of indicative areas, for example by: active diplomacy with States in Europe, Africa and elsewhere to safeguard the rights of all migrants and promote fair and equitable migration policies that contribute to sustainable development; stepping up operational support, as needed, in Southern and South Eastern Europe, North Africa and in the Horn of Africa; providing advice on the human rights of all migrants at points of origin, transit and destination; and promoting compliance with international standards for human rights in law enforcement. 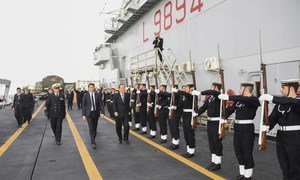