As United Nations Member States prepare to adopt and move toward implementing a new development agenda, the President of the General Assembly said it is critical to ensure that “a harmonious relationship with our planet underpins our quest to achieve sustainable development.”

The development path the world has taken has imposed a heavy cost on our planet, leading to serious environmental degradation, he said, underscoring that “it is now widely accepted that our way of life, especially the production and consumption patterns, is no longer sustainable.”

“As scientists have repeatedly warned, we are severely affecting the Earth’s carrying capacity and are in danger of reaching planetary boundaries or tipping points beyond which we risk irreversible and abrupt environmental changes,” he said.

“We have to adopt a post-2015 development agenda that is holistic in nature,” Mr. Kutesa continued. “The agenda should put the well-being of both humankind and our planet at the centre of our sustainable development efforts.”

He drew attention to the need to reach a new, universal climate change agreement this coming December in Paris that will be another important step for ensuring a better chance of preserving the planet for the present and future generations.

“Through these efforts, we should bear in mind that profound changes in attitudes, behaviours and policies will be required to create a world in which human beings live in harmony with nature.”

Mr. Kutesa acknowledged the increasing awareness and proactive stances being taken by leaders around the world to address the environmental challenges we face.

“Nevertheless,” he said, “much more needs to be done in terms of policy making, technology development and transfer as well as education and capacity building.”

The General Assembly President opened the meeting with a minute of silence in tribute to the victims of those who lost their lives in this weekend’s devastating earthquake in Nepal and surrounding regions including Bangladesh, India and Tibet. 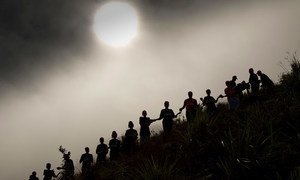 ‘The power to change begins with you,’ says Ban, urging sustainable choices on Mother Earth Day

Humanity is well aware of the devastating damage and pollution it have wrought on planet Earth, and “even with this knowledge, we have yet to change our ways,” United Nations Secretary-General said today urging people to reset their relationship with nature and every living being it sustains.