Progress in working towards global nuclear non-proliferation has stalled and the trend towards “nuclear zero” is reversing, United Nations Secretary-General Ban Ki-moon warned today as he called on Member States to urgently ramp up efforts in tackling nuclear disarmament.

“Eliminating nuclear weapons is a top priority for the United Nations,” said Mr. Ban in remarks delivered on his behalf by UN Deputy Secretary-General Jan Eliasson to the opening plenary meeting of the Review Conference of the Parties to the Treaty on the Non-Proliferation of Nuclear Weapons (NPT) earlier this morning. “No other weapon has the potential to inflict such wanton destruction on our world.”

However, the Secretary-General added, instead of progress towards new arms reduction agreements, “we have allegations of destabilizing violations of existing agreements.”

He noted that the danger posed by nuclear weapons continued to persist since the last NPT Review Conference, including with respect to the Democratic People’s Republic of Korea (DPRK) and cautioned of the growing series of setbacks the Treaty was facing.

“Instead of a Comprehensive Nuclear Test-Ban Treaty in force or a treaty banning the production of fissile materials for nuclear weapons, we see expensive modernization programmes that will entrench nuclear weapons for decades to come. Instead of pursuing proposals to accelerate nuclear disarmament, including my Five Point Plan, there has been a dangerous return to Cold War mentalities,” Mr. Ban continued in the remarks. “This reversal is a regression for our world.”

In a separate statement, Yukiya Amano, Director General of the International Atomic Energy Agency (IAEA), echoed Mr. Ban’s apprehension regarding nuclear proliferation claiming he was “seriously concerned” about the DPRK’s nuclear programme and declaring that his agency remained unable to conclude that “all nuclear material in Iran is in peaceful activities.”

Nevertheless, he said, efforts to render the Middle East free of nuclear weapons continued amid some optimism following a recent forum held on the issue. The ‘Forum on Experience of Possible Relevance to the Creation of a Nuclear-Weapon-Free Zone in the Middle East,’ he explained, had shown that it was possible “to have constructive dialogue on the establishment if a nuclear-weapon-free zone in this region, despite the complexity of the issue and differences of view among States concerned.”

At the same time, Mr. Amano did note that the IAEA’s wide-ranging functions – from monitoring nuclear safety to assisting the UN’s Ebola response – were being successfully carried out around the world.

“The IAEA is working very hard to fulfil its very broad mandate,” Mr. Amano concluded. “The challenges are considerable, but I am confident that we can continue to address them successfully with the support of all our Member States.”

The 2015 Review Conference will run at UN Headquarters in New York through 22 May. The President-designate of the Conference is Ambassador Taous Feroukhi from Algeria.

The NPT is a landmark international treaty whose objective is to prevent the spread of nuclear weapons and weapons technology, to promote cooperation in the peaceful uses of nuclear energy and to further the goal of achieving nuclear disarmament and general and complete disarmament. It represents the only binding commitment in a multilateral treaty to the goal of disarmament by the nuclear-weapon States. 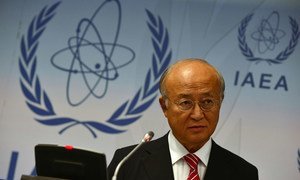 The United Nations atomic energy chief today highlighted some of the most pressing issues on the agenda of his agency, ranging from nuclear safety to verification of the activities of Iran and the Democratic People’s Republic of Korea (DPRK).