World Bank
Young women and girls carry water in Nigeria. Meanwhile, the Secretary-General’s progress report on the SDGs reveals that the world is coming up short.

A major new report released today in seven locations around the world by the United Nations entity for gender equality and women’s empowerment (UN Women) calls for the transformation of economies to make women’s rights and equality a reality.

The UN Women report, Progress of the World’s Women 2015-2016: Transforming Economies, Realizing Rights, brings together human rights and economic policymaking to call for far-reaching changes to the global policy agenda and imagines what the global economy would look like if it truly worked for women, for the benefit of all.

“Our public resources are not flowing in the directions where they are most needed,” said UN Women Executive Director Phumzile Mlambo-Ngcuka. “For example, to provide safe water and sanitation, quality health care, and decent child- and elderly-care services. Where there are no public services, the deficit is borne by women and girls.”

The report’s publication comes as the international community negotiates a transformative new agenda for sustainable development, 20 years after the landmark Fourth World Conference on Women, in Beijing, China, which set out an ambitious agenda to advance gender equality. Despite significant advances in many societies, particularly in advancing women’s legal rights, millions of women remain consigned to low paid, poor quality jobs, and lack access to health care, clean water and sanitation.

Only half of women participate in the formal global labour force, compared to three quarters of men, with some developing regions showing 95 per cent of women’s employment informal. That includes unpaid care work, for which women carry the burden, and which has intensified thanks to austerity policies and cutbacks. 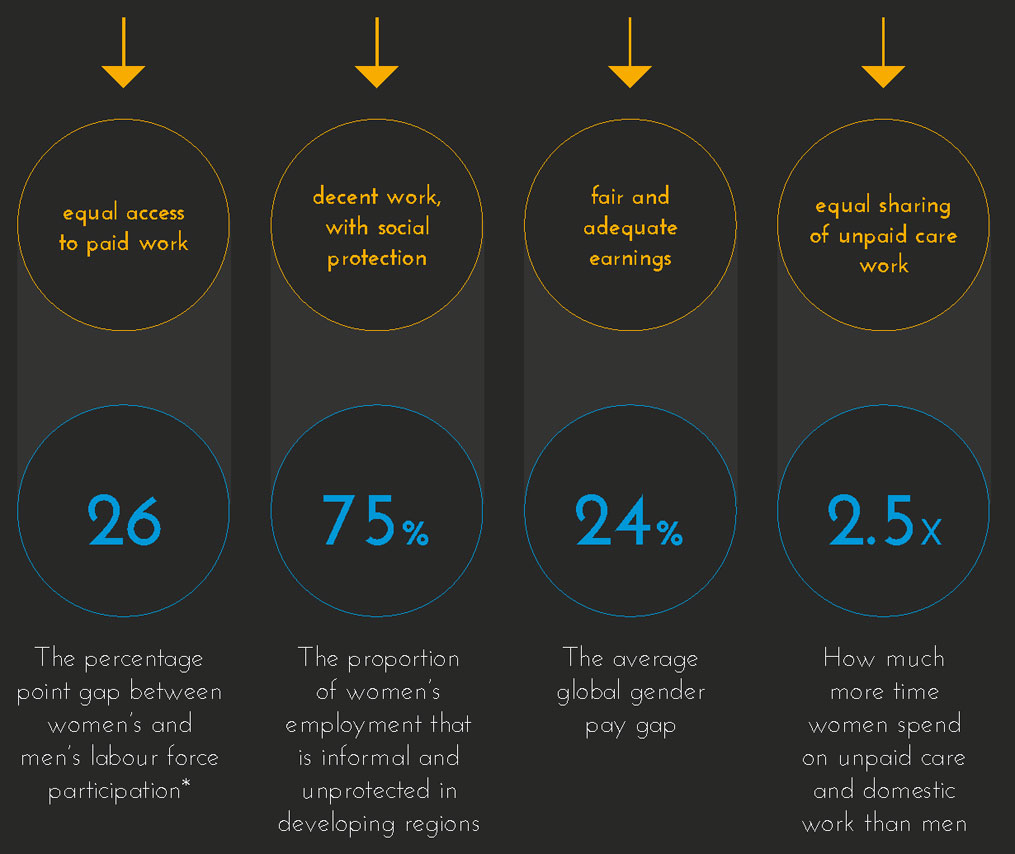 “This is a care penalty that unfairly punishes women for stepping in when the State does not provide resources,” said Ms. Mlambo-Ngcuka. “We need policies that make it possible for both women and men to care for their loved ones without having to forego their own economic security and independence.”

The report makes the case that the alternative economic agenda it outlines would not only create fairer societies, it would also create new sectors of employment, for instance in the care economy.

“The report is very much focused on picturing an economy that in working for women does so through providing them a recognition and valuing of the paid and unpaid care work that they do,” said Lakshmi Puri, the Deputy Executive Director of UN Women, in an interview with UN Radio.

The report makes 10 key recommendations for actions that Governments and others can take to move towards an economy that truly works for women, dismantling a system in which they are paid on average 24 per cent less than men globally.

An economy designed with women’s needs in mind would give them an equal voice in economic decision-making; from the way in which time and money are spent in their households, to the ways in which resources are raised and allocated at the national level, to how broader economic parameters are set by global institutions.

The report sets out a vision of a global economy fit for women, where they have equal access to productive resources and social protection, which provides them with sufficient income to support an adequate standard of living, and where the work they do is respected and valued.

It calls for a paradigm shift in the way governments, financial institutions, businesses and civil society approach economic policy thinking and human rights, to bring about an alternative economic agenda which places women and their rights at its centre.

“Realizing economic and social rights of women enables the transformation of economies and it also enables empowering of all, including men and boys,” said Ms. Puri. “When we ask for the economies to be transformed, it cannot be governance as usual business as usual. The corporate sector must change. It cannot be labour markets as usual.” 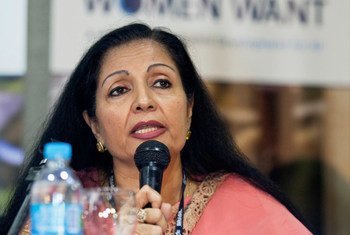 17 March 2015
A senior United Nations official today stressed the need for more rapid advancements on gender equality, saying the pace of change since the 1995 World Conference on Women, held in Beijing, on many issues has not been sufficient and major disparities between genders remain.