UNHCR/D.R. Uprety
UNHCR staff collect plastic sheeting from a warehouse before it is distributed to people in eastern Nepal affected by the devastating earthquake.
27 April 2015

The United Nations refugee agency announced today that it is rushing critical supplies to Nepal in the wake of the devastating earthquake that has reportedly killed more than 3,000 people and injured thousands more on Saturday, and pledged that it ready to provide any assistance needed to help survivors through these difficult times.

“We are deeply saddened that thousands of people have been killed, injured or displaced in the disaster. These numbers are still rising with frequent aftershocks and as search and rescue teams reach remote areas,” said Daisy Dell, Director of the Asia-Pacific bureau of the Office of the UN High Commissioner for Refugees (UNHCR).

“UNHCR stands in solidarity with Nepal, which has been a generous host to thousands of refugees over the years,” she added.

UNHCR will also be providing tarpaulins, which will help shelter earthquake victims whose homes have been destroyed or who are too afraid of aftershocks to return home. In view of the electricity shortage, UNHCR hopes that the solar lamps can provide some light in the affected areas and help to charge mobile phones at a time when families need to communicate urgently.

The UN refugee agency has been working with the Nepali government since the early 1960s to care for refugees from the region and beyond. There are currently more than 21,000 refugees from Bhutan in two camps in eastern Nepal, and some 650 refugees and asylum-seekers in and around Kathmandu.

Meanwhile, the UN Children's Fund (UNICEF) says it is mobilizing an urgent response to help children and families affected by the earthquake. With children accounting for half the country's population, UNICEF fears the disaster will have a severe impact on children.

UNICEF Thailand Representative, Bijaya Rajbhandari, who is a national of Nepal, happened to be in Kathmandu with his family when the earthquake hit. “It was a terrifyingly strong earthquake,” he said.

“Today, we can see extensive damage to buildings across the city and many people have spent the night outside in the cold because of the ongoing shocks. These people are without basic facilities and the government hospitals are already overcrowded. People need help and they need it now.”

UNICEF says it has prepositioned supplies, including water purification tablets, hygiene kits, tarpaulins and nutrition supplies and is working with government and other partners to meet children's immediate needs in the areas of water and sanitation, child protection, health and nutrition.

In addition, UNICEF Thailand has launched an appeal for urgent donations from the Thai public to help with the response.

Further to this announcement, the UN Office for the Coordination of Humanitarian Affairs (OCHA) has issued its issued guidelines for donations to the international response through the UN Central Emergency Response Fund (CERF).

“I would like to express my deepest condolences to the people and the Government of Nepal following loss of life even as the toll continues to rise and widespread devastation across the country,” Mr. Zhao added.

Emergency telecommunications also play a critical role in the immediate aftermath of disasters.

“They ensure timely flow of information that is much needed by government agencies and other humanitarian actors involved in rescue operations,” said Brahima Sanou, Director of ITU's Telecommunication Development Bureau.

According to the UN, initial government reports confirm that 30 out of 75 districts in the country have been affected in the Western and Central Regions, including Kathmandu Valley. This includes mountainous and hilly terrain in areas where rural populations are widely dispersed as well as some very densely populated cities. 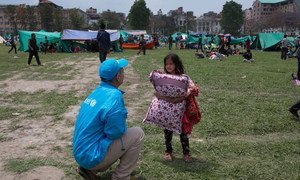 UN responds to destruction, displacement in wake of Nepal earthquake

The United Nations relief wing said today that at least 2,200 people have died and over 5,800 are injured as a result of a 7.8 magnitude earthquake that struck Nepal on Saturday.