A United Nations-backed forum today concluded in Fez, Morocco, having developed a plan of action aimed at preventing incitement to violence that could lead to atrocity crimes.

The 'Forum on the Role of Religious Leaders in Preventing Incitement that could Lead to Atrocity Crimes' was organized by the United Nations Office on Genocide Prevention and the Responsibility to Protect, the King Abdullah Bin Abdulaziz International Centre for Interreligious and Intercultural Dialogue, the Interministerial Delegation for Human Rights and Rabita Mohammadia of Ulama of Morocco, and the plan of action focused on eight major areas for consideration.

It called for monitoring of incitement, the development of alternative messages, engagement in dialogue, efforts to develop and revise education to include better mainstreaming of appreciation of all cultures, engaging in and strengthening inter-religious and intra-religious dialogue and activities to ensure understanding, respect and communication, engaging in dialogue on grievances, strengthening clarity of message and engaging with political leaders.

Adama Dieng, UN Special Advisor on the Prevention of Genocide, spoke to UN Radio about the discussion, saying that agreement on the draft came with the knowledge that the final outcome would need to balance different views on freedom of expression and the need to prevent incitement.

“Of course, from a human rights perspective, I am a very strong supporter of freedom of expression,” Mr. Dieng said. “At the same time, we do believe that there are efforts to be made because we have seen the role that some media play – Rwanda was a case, even Kenya, we remember the 2007 election, when the radio was used to spread messages of hatred.”

The agreed Plan of Action, which is currently a draft, will be further developed at five regional meetings over the next year, where religious leaders and faith-based organisations will strengthen and augment it with additional detailed elements. The Plan of Action and a Declaration will be adopted at a plenary meeting of religious leaders which is planned to take place in 2016.

The Plan also recommends several other actions including dialogue training, mapping and networking of religious leaders who actively work to prevent or counter incitement that can lead to atrocity crimes around the world, engaging with youth and ensuring a gender perspective in all actions proposed and undertaken. 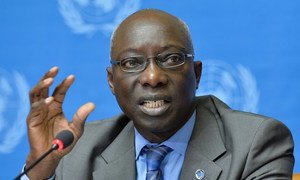