Militants in South Sudan have handed over to the United Nations Children's Fund (UNICEF) a final group of 283 children in what the agency described as “a small piece of good news in what is otherwise a terrible situation for children in other parts of [the country],” where many boys and girls have been abducted and forcibly recruited as child soldiers.

The release of 282 boys and one girl by the so-called 'Cobra Faction' took place in Labrab, a village in a remote corner of Jonglei state in South Sudan, bringing to 1,757 the number of children who have been released by the militant group this year.

During the release ceremony, the children handed in their weapons and uniforms in exchange for civilian clothes. The boys and the one girl will stay at the interim care centre where they will receive food, shelter, medical and psychosocial support until their families are traced and they can return home.

“It is the last chapter in a series of releases that have taken place since January and follows a peace agreement between the faction and the Government of South Sudan,” UNICEF said in a press release issued today in Juba, the capital of South Sudan.

Jonathan Veitch, UNICEF's South Sudan Representative, said: “We are very pleased to have seen this process through and that the final group of children has been released from the Cobra Faction.”

“But the work is far from over,” he continued. “These children must be reunited with their families and they must begin the long and difficult road towards rebuilding their lives.”

“UNICEF is extremely concerned about the welfare of children recently recruited around Malakal in Upper Nile state, given the recent upsurge in fighting in the area, the UNICEF representative said. “We again call for the immediate release of these children and we continue to stand ready to provide all necessary support for their demobilization,” he said.

The reintegration programme, which includes ongoing psychosocial support, costs an estimated $2,580 per child. UNICEF faces a funding shortfall of $11 million for the programme.

The conflict that began in December 2013 in South Sudan continues to affect the lives of millions of people. It has been marked by brutal violence against civilians and deepening suffering across the country. The major humanitarian consequences are widespread displacement due to the violence; high rates of death, disease, and injuries, severe food insecurity and disrupted livelihoods, and a major malnutrition crisis.

Some 5.8 million people are estimated to be in some degree of food insecurity as of September 2014. This number is projected to increase to 6.4 million during the first quarter of 2015. The people in need for the coming year include an anticipated 1.95 million internally displaced people and a projected 293,000 refugees. Within South Sudan, the most acute needs are found in Jonglei, Unity and Upper Nile, the three states that have seen the most active hostilities. 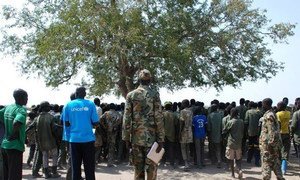 The United Nations Children’s Fund (UNICEF) is applauding the release of another 300 children from an armed group in South Sudan – the second such UN-backed demobilization of child soldiers in less than a month.