UN Photo/Mark Garten
Angelina Jolie, Special Envoy of the UN High Commissioner for Refugees (UNHCR), addresses the Security Council on the continuing conflict in Syria and the humanitarian and refugee crises.
24 April 2015

The Syrian crisis is getting worse and civilians are paying the price, senior United Nations humanitarian officials said today as they called for an end to the “numbness to the senseless violence”, while the Security Council demanded parties to the conflict facilitate expanded aid operations and immediate delivery of life-saving supplies to hard-to-reach and besieged areas.

Addressing the 15-member body during an open briefing, UN Under-Secretary-General for Humanitarian Affairs and Emergency Relief Coordinator Valerie Amos said it is alarming that “people have become numb to figures that should, every day, shock our collective conscience.”

“Each time, I speak of atrocity after atrocity; violation after violation; misery after misery,” said Ms. Amos, who was joined in her plea for action by António Guterres, UN High Commissioner for Refugees (UNHCR), Angelina Jolie Pitt, UNHCR's Special Envoy, and Ertharin Cousin, Executive Director of the UN World Food Programme (WFP).

The Security Council adopted a Presidential Statement on the issue, demanding that all parties to the Syrian domestic conflict immediately put an end to all forms of violence. The Council expressed alarm that the Syrian crisis has become the largest humanitarian emergency crisis in the world today, threatening peace and security in the region with diverse implications on the neighbouring countries and the displacement of millions.

The 15-member body emphasized the strain placed on host country education systems by the inflow of refugees and that additional resources will be required to help the 600,000 children outside the school system. It also urged donors, international financial institutions, and UN agencies to consider financing instruments that effectively meet the “unique needs” of countries impacted by the conflict. 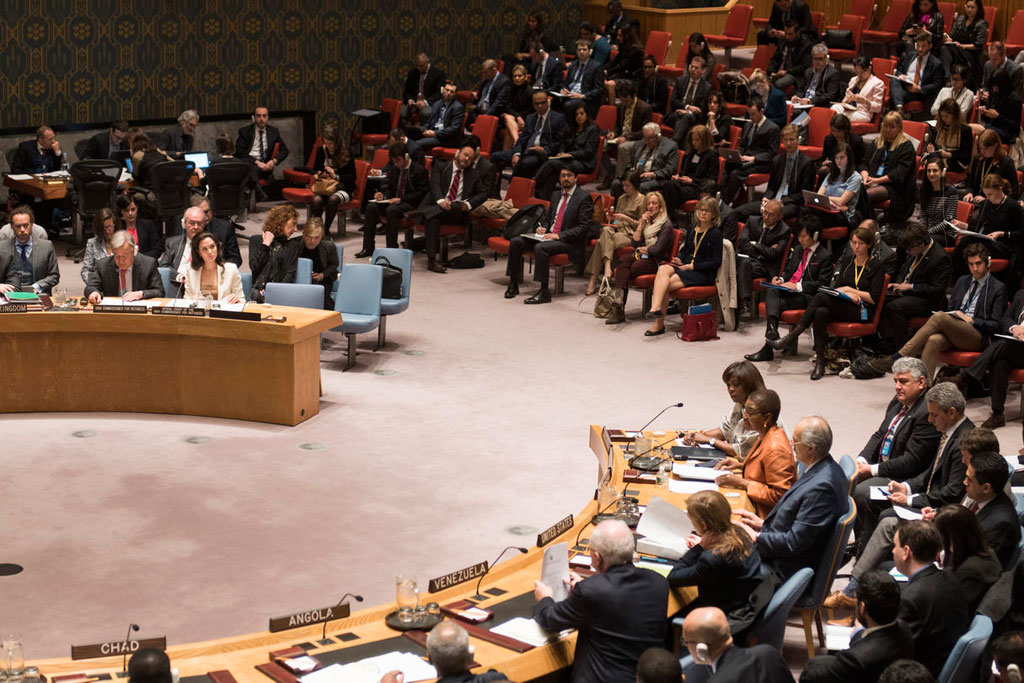 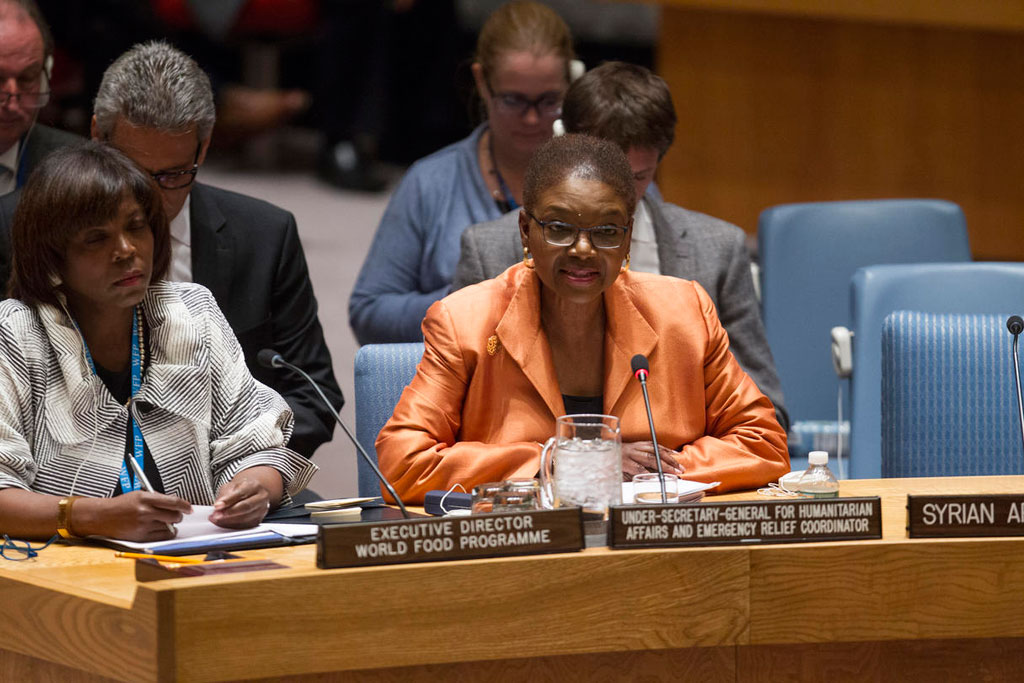 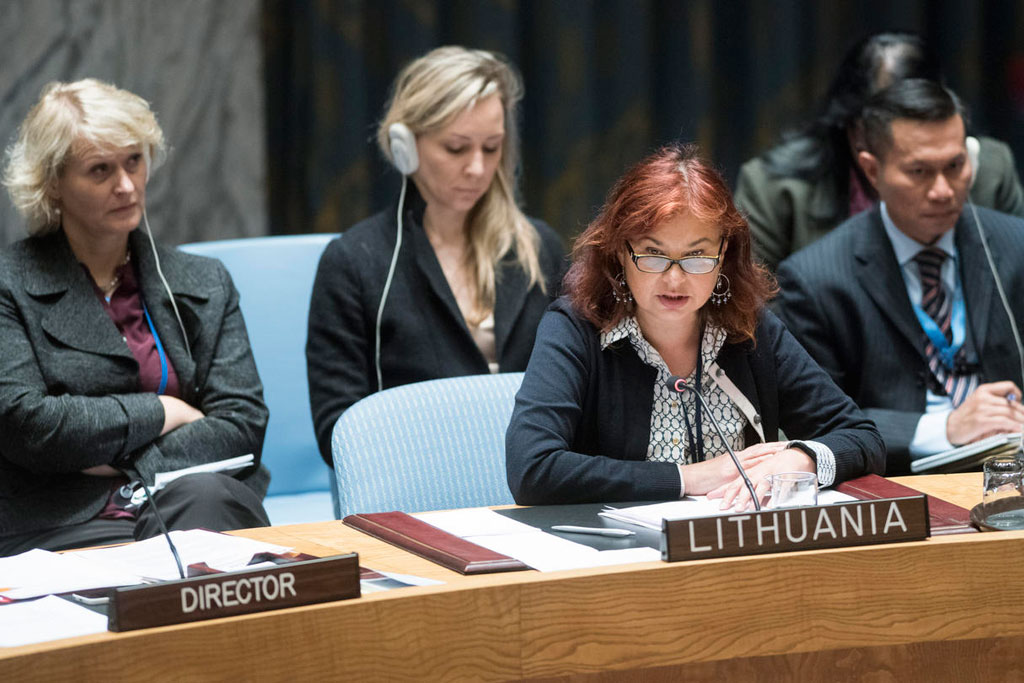 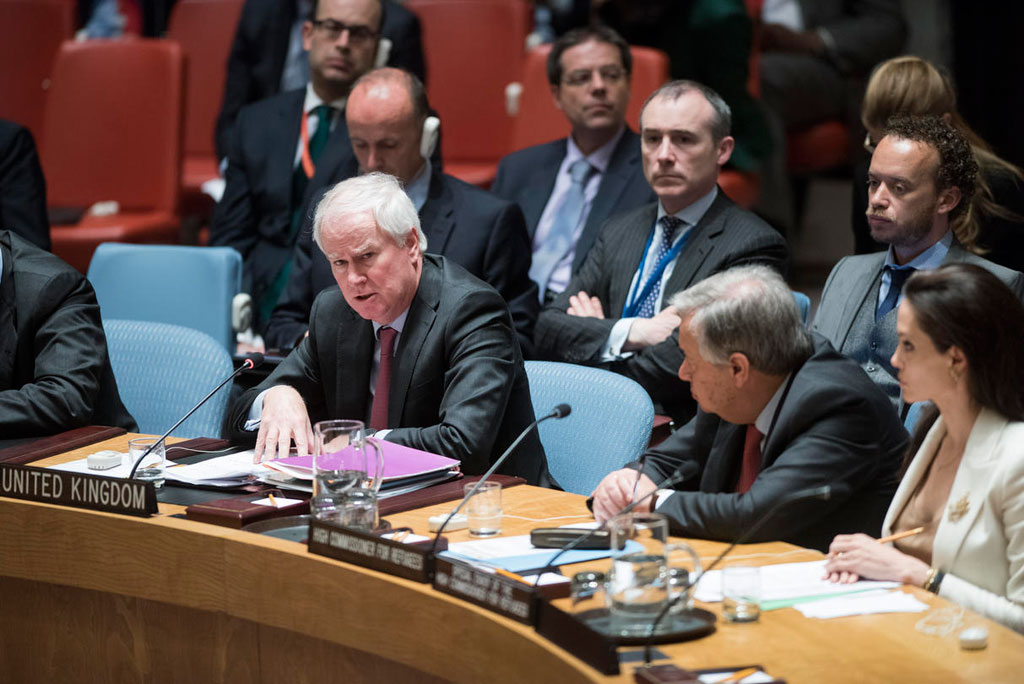 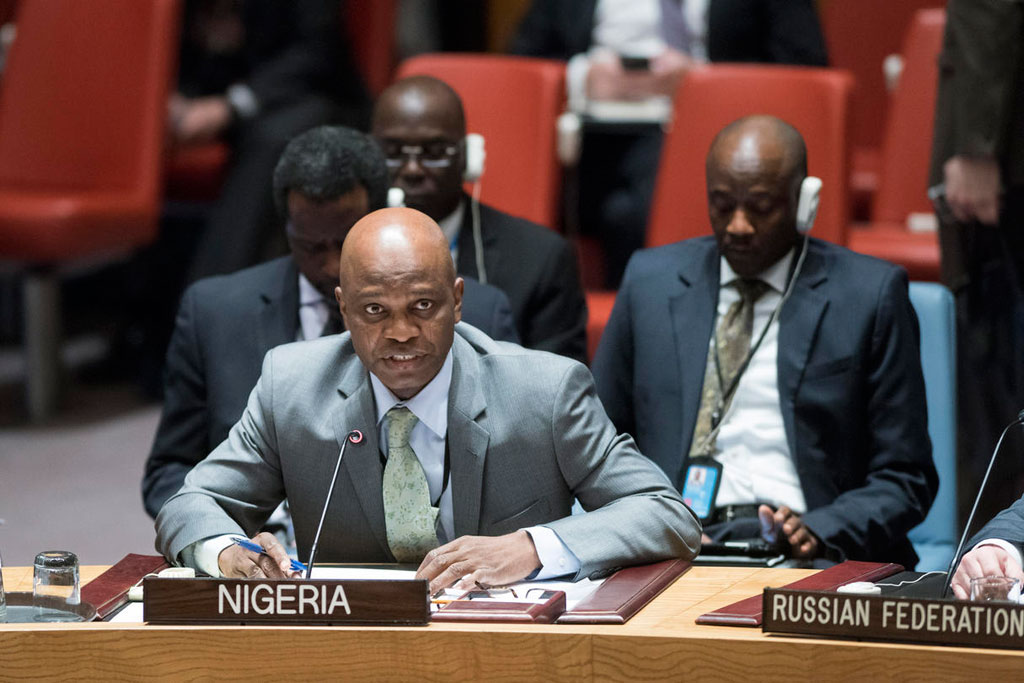 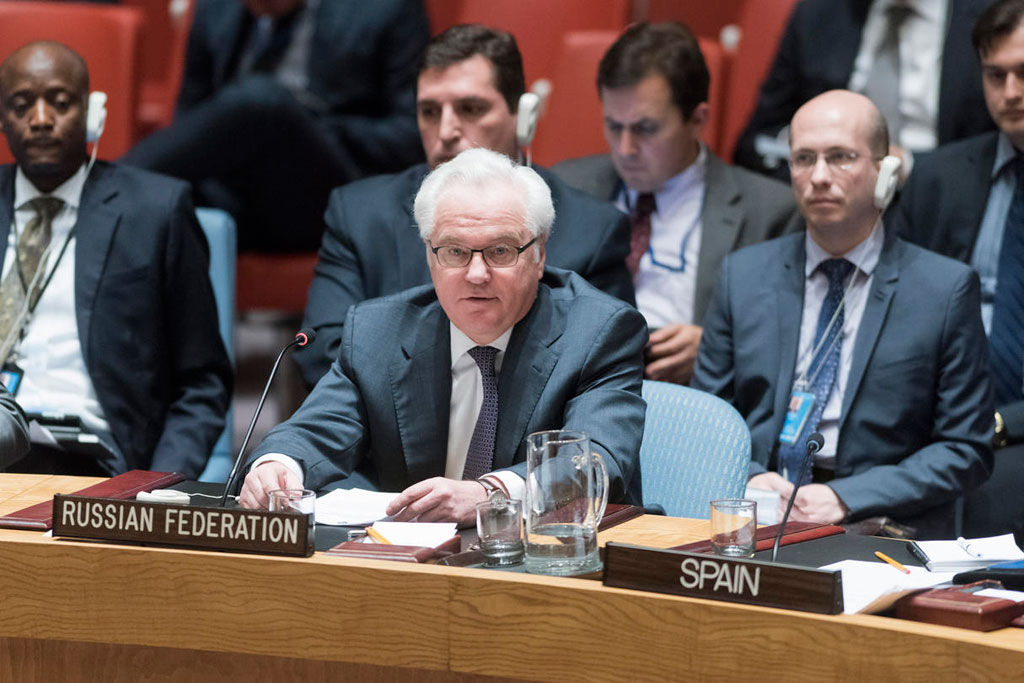 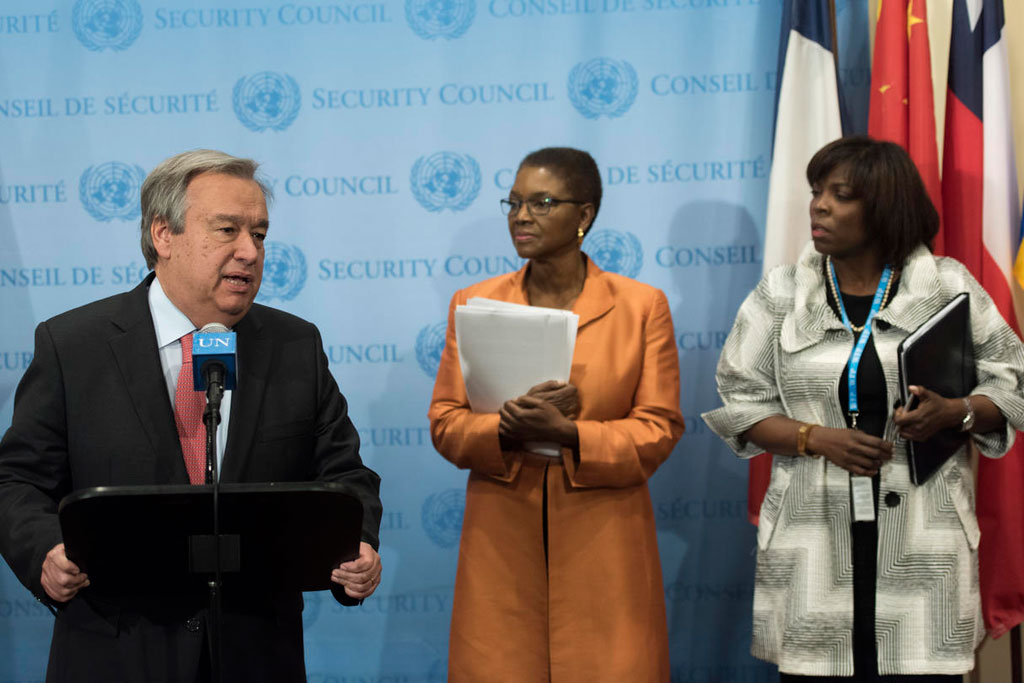 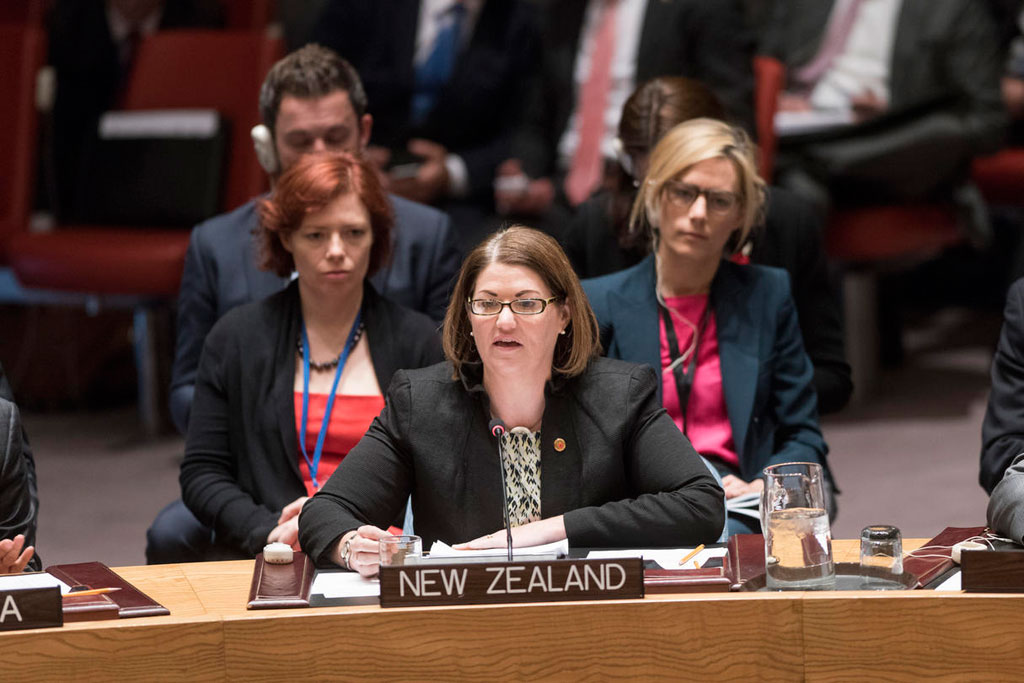 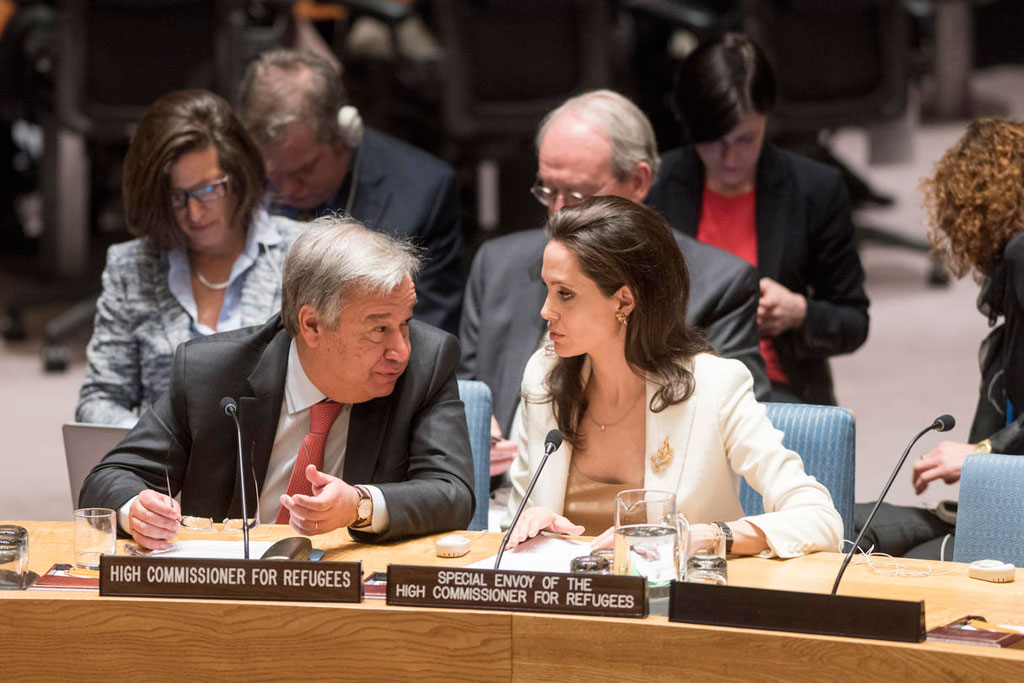 UN Officials, delegates and other participants at the Security Council meeting on the continuing conflict in Syria and the attendant humanitarian and refugee crises. UN Photo/Mark Garten

“There are fresh allegations that chemical weapons have been used again in Idlib, killing and injuring civilians,” Ms. Amos said in her remarks, emphasizing that the Council has been briefed on the situation in Yarmouk, the besieged, largely Palestinian refugee camp on the outskirts of Damascus, where today people have reached “new levels of despair.”

With hundreds of thousands of people in a “daily struggle for survival,” it is imperative to have full and unimpeded humanitarian access to populations in need. All aid, but particularly medical and surgical aid, must be allowed on convoys. Government security forces had again removed all surgical supplies from the trucks on their way to Homs governorate, depriving people of urgently needed treatments, she told the Council.

The people of Syria “rightly want more,” said Ms. Amos. They want an end to the war that has “destroyed their country and ravaged their lives…Stop the violations of international law, protect civilians and ensure humanitarian access,” she urged.

“The failure to stop the violence has undermined the credibility of this Council and eroded confidence in the international community to take its responsibilities seriously,” she continued.

She called on the Council to demand that attacks on education and cease; establish a fact-finding mission; mandate the negotiation of humanitarian pauses; send perpetrators a clear message that their crimes will not go unpunished; and enforce an arms embargo for violations of international law.

“There is no humanitarian solution. The only solution is a political dialogue. Time is, however, running out on Syria. This is a crisis with potential global repercussions. I ask the Council to match its scale with an equally bold response,” she said.

Taking to the floor next, Mr. Guterres said: “We are all longing for a shred of hope, some good news, but since my last briefing to this Council, things have only gotten worse.”

Some 14 million people are now displaced due to the interlinked crises in Syria and Iraq. New border management measures are preventing refugees from reaching safety. And there is now a growing trend of “host fatigue” which has increased tensions in communities, as local families struggle harder to cope the longer the conflict drags on.

Living conditions across the region are deteriorating. Dangerous coping mechanisms are on the rise with many families forced to send their children to work or to marry off their teenage daughters. Further, more and more desperate refugees are attempting the dangerous journey across the Mediterranean.

“There has to be massively increased support to the neighbouring countries,” he said, emphasizing the need for a “fundamental review of development cooperation policies.”

Because Lebanon and Jordan are middle income countries, the World Bank is not allowed to give them grants to help deal with the severe demographic shock they have endured. It is imperative to redress this and other “serious inadequacies” in the global aid architecture, he explained.

“With more support across the region, we could help turn refugees' situation around from one of dependency and unsustainability to one where their economic self-reliance becomes an option, allowing them to also contribute to the development of their host societies,” Mr. Guterres added.

Adressing the Council next, Ms. Jolie Pitt said that since the Syrian conflict began in 2011, she has made 11field visits to Syrian refugees in Iraq, Jordan, Lebanon, Turkey and Malta.

“I wish that some of the Syrians I met could be here today, I think of the mother I met recently in a refugee camp in Iraq. She could tell you what it is like to try to live after your young daughter was ripped from your family by armed men and taken as a sex slave,” the Oscar-winning American actress said.

“Any one of the Syrians that I met would speak more eloquently about the conflict than I ever could,” she added. “I'm here for them because this is their United Nations. Here, all countries and all peoples are equal. The purpose of the UN is to prevent and end conflict. To bring countries together; find diplomatic solutions and save lives. We are failing to do this in Syria.”

The crisis is made worse by division and indecision in the international community preventing the Security Council from fulfilling its duty, Ms. Jolie Pitt emphasized.

“The people we met with trust that the truth alone would guarantee action,” she said, describing how throughout the years hope turned into anger and anger now into despair and hopelessness.

“On my last visit, in February, anger had subsided to resignation and misery…To be a Syrian caught up in this conflict is to be cut off from every law and principle designed to protect innocent life.”

The Security Council must address these threats to international peace and security but we are “standing by” in Syria, she added. “The problem is not lack of information. We know in excruciating detail what is happening.”

The problem is a lack of political will. All of the good the UN does worldwide is undermined by the message being sent in Syria ¬– that hospitals can be bombed, aid can be withheld, and civilians starved with impunity, Ms. Jolie Pitt said, appealing for the Council to work as one and reach a settlement to bring justice and accountability for the Syrian people.

“I urge the Council to visit refugees and see their impact. Those refugees cannot come to the Council so please will you go to them,” Ms. Jolie Pitt said.

It is “sickening,” she said, how thousands of refugees are drowning on the “doorstep of the world's wealthiest continent,” and urged action to address the utter desperation that forces people to go on that deadly journey. She also urged the Council to take more serious action to combat sexual violence in conflict and called on Member States to begin preparations now so that Syrian women are represented in talks focusing on rebuilding their country.

Since the beginning of the crisis, Ms. Cousin said, WFP had been assisting 4 million people inside Syria and 1.9 million people outside the war-torn country. But, she warned, amid funding shortfalls that very same humanitarian aid was now in “jeopardy.”

“We have been forced to cut the family food basket inside of Syria by 30 per cent,” the WFP Executive Director continued. “I must warn this Council that when we reduce food access operations, we reduce stability.”

Against that backdrop, she noted that as WFP response teams work feverishly across the five host nations harbouring thousands of refugees, many of the displaced remain at risk of malnutrition and stunted development, particularly with food prices surging. Some 4 million Syrian women and children, she added, had been plunged into “a serious nutritional crisis” and urgently required preventative nutritional services.

The length and complexity of this crisis means we must increase not reduce, food and nutritional assistance, Ms. Cousin concluded.

“We cannot ask parents to raise their children in a region without food and without peace.”