After decades of “sustained and unrestrained anti-foreigner abuse,” and in the wake of a recent article in the Sun newspaper calling migrants ‘cockroaches,’ the United Nations human rights chief today urged British authorities and media to take steps to curb incitement to hatred by tabloid newspapers, in line with the country’s obligations under national and international law.

The UN High Commissioner for Human Rights, Zeid Ra’ad Al Hussein, also called a firmer line on racism to be taken by European countries, which, he said, “under the guise of freedom of expression, are being allowed to feed a vicious cycle of vilification, intolerance and politicization of migrants, as well as of marginalized European minorities such as the Roma.”

“The nasty underbelly of racism that is characterizing the migration debate in an increasing number of European Union countries, has skewed the EU response to the crisis,” Mr. Zeid said in a statement released by OHCHR.

The Sun article that Mr. Zeid is referring to was published 17 April and began with the words “Show me pictures of coffins, show me bodies floating in water, play violins and show me skinny people looking sad. I still don't care.” Elsewhere in the article the columnist described migrants as “a plague of feral humans,” and said some British towns were “festering sores, plagued by swarms of migrants and asylum seekers shelling out benefits like Monopoly money.”

The Sun columnist also advocated using gunboats to stop migrants, threatening them with violence, and said “drilling a few holes in the bottom of anything suspiciously resembling a boat would be a good idea too.”

Mr. Zeid said that in language very similar to that employed by Rwanda’s Kangura newspaper and Radio Mille Collines during the lead up to the 1994 genocide, the columnist said “make no mistake, these migrants are like cockroaches.” Leading figures in both Rwandan media organizations were later convicted by an international tribunal of public incitement to commit genocide.

In this regard, Mr. Zeid urged the UK authorities to closely examine the broader issue of incitement to hatred by the tabloid press and other sectors of society. “This vicious verbal assault on migrants and asylum seekers in the UK tabloid press has continued unchallenged under the law for far too long.”

“The Nazi media described people their masters wanted to eliminate as rats and cockroaches. This type of language is clearly inflammatory and unacceptable, especially in a national newspaper. The Sun’s editors took an editorial decision to publish this article, and – if it is found in breach of the law – should be held responsible along with the author,” the rights chief added.

Mr. Zeid noted that the Sun article was simply one of the more extreme examples of thousands of anti-foreigner articles that have appeared in UK tabloids over the past two decades. Asylum seekers and migrants have been linked to rape, murder, disease, theft, and almost every conceivable crime and misdemeanour in front-page articles and two-page spreads, in cartoons, editorials, even on the sports pages of almost all the UK’s national tabloid newspapers.

“Many of these stories have been grossly distorted and some have been outright fabrications. Elsewhere in Europe, as well as in other countries, there has been a similar process of demonization taking place, but usually led by extremist political parties or demagogues rather than extremist media” he said.

The High Commissioner noted that while migration and refugee issues are completely valid topics for public debate, “it is imperative that migration policy decisions that affect people’s lives and fundamental human rights should be made on the basis of fact – not fiction, exaggeration or blatant xenophobia.” 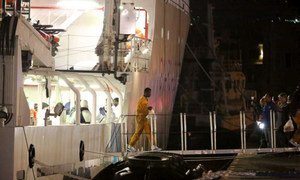 The most senior United Nations officials dealing respectively with refugees, human rights, and migration and development, have appealed strongly to European leaders to put human life, rights, and dignity first when agreeing today a common response to what they called the “tragedy of epic proportions” unfolding in the Mediterranean Sea, where some 1,600 people have died this year trying to flee their strife-torn homelands.