ITU/P. Woods
Participants arrive at Girls in ICT Day 2015, which was held at ITU Headquarters, Geneva.

23 April 2015
Aiming to attract women to fields “where strong demand is creating global skills shortfall,” the tech community is gearing up to celebrate ‘Girls in ICT Day’ around the world.

“ICTs [information and communication technologies] are an exciting and rapidly-growing field, offering interesting, important and well-paid job opportunities,” said the Secretary-General of the International Telecommunication Union (ITU), Houlin Zhao, in a statement.

“A career in ICT allows girls to use their creativity, work in international environments, and participate in shaping our future,” he added, noting that with 95 per cent of all jobs now having a digital component, digital skills are no longer just an advantage, they are essential.

Organized by ITU, the United Nations body responsible for issues that concern information and communication technologies, the Day aims to promote Girls in ICT by organizing events, partnering with other UN agencies, supporting organizers in their respective regions and hosting competitions. Marked every year on the fourth Thursday in April, ITU and the global technology aim to promote careers in the field to a new generation of young women.

Launched by ITU in 2010, the Day is part of an international drive to encourage more females to study STEM subjects – science, technology, engineering and mathematics. It aims to counter the decline in the number of female ICT students, which is in turn contributing to a predicted global shortfall of at least two million ICT jobs which will not be able to be filled.

“I invite national governments to consider integrating basic coding skills into their national education curricula, alongside basics like reading, writing and arithmetic,” said the Director of the ITU Telecommunication Development Bureau, Brahima Sanou.

“Girls and young women who learn coding, apps development and computer science will have powerful tools at their disposal to drive economic prosperity for themselves, and overall socio-economic development for their communities,” she added.

In Organisation for Economic Co-operation and Development (OECD) countries, female students now account for fewer than 20 per cent of tertiary ICT enrolments; down from nearly 40 per cent in the 1980s, when computer science courses first appeared on university curricula. Only around 3 per cent of total female graduates study ICT fields, compared with around 10 per cent of male graduates. This academic gender gap is reflected in the number of female ICT professionals, now estimated at just 20 per cent across the OECD.

With strong backing from the IT sector and national governments, ‘Girls in ICT Day’ has rapidly grown into a global movement, with an estimated 3,500 events organized in over 140 countries, reaching 111,000 girls, since the event became a fixture on the UN calendar five years ago.

Cisco, a major backer of the Day, is organizing events in more than 50 countries, aiming to reach over 3,000 girls, while Microsoft, a long-time advocate of ICT training through its Digigirlz programme, is launching its annual Pink Cloud girls in ICT event on April 23rd as part of Milan’s World Expo. 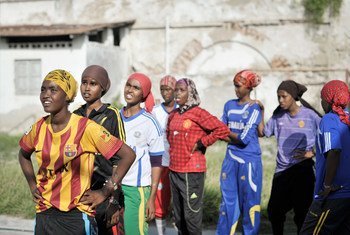 16 March 2015
The greater participation of women and girls in sports can help lift their involvement in society, fight gender stereotypes and accelerate progress towards gender parity, the head of the United Nations entity for gender equality and women’s empowerment declared today.