WHO Yemen
WHO is providing fuel to the Ministry of Public Health and Population in Yemen to address critical shortages.
22 April 2015

As the United Nations humanitarian wing appealed for “any initiative that can reduce the violence” in Yemen, the World Health Organization (WHO) office in the country reported that the death toll from the fighting topped 1,000 over the past month and warned that main hospitals face shutting down because of critical shortages of power, lack of fuel and oxygen.

Meanwhile, the UN Children’s Fund (UNICEF) in Yemen said there were 7.9 million children among the 15.9 million people – or some 60 per cent of the total population – in need of humanitarian assistance in the war-torn country.

Reporting from its country office in Yemen, WHO said health facilities across the country had reported 1,080 deaths and 4,352 injured between 19 March and 20 April.

“Any initiative that can reduce the violence in Yemen is welcome,” the UN Office for the Coordination of Humanitarian Affairs (OCHA) said in its latest situation update.

Due to insecurity today in Aden city and the spread of street fighting, OCHA reported that one aid agency was unable to distribute household items to displaced people staying in schools.

But another relief organization successfully delivered hygiene items to one of Aden’s major public hospitals, while water trucking has started today for vulnerable people in Al Dhubayiat area of Al Dhale’e governorate, which has had no water and electricity for more than a month.

WHO noted that Yemen’s disease surveillance reports show a doubling over the past month in the number of cases of bloody diarrhoea in children under the age of five.

“Main hospitals in affected areas are at risk of shutting down due to power outages, lack of fuel for generators, and lack of oxygen,” WHO reported, adding it is supporting the Yemeni Ministry of Health by providing fuel for hospitals, vaccine storage and ambulances.

In related news, OCHA reported that after the announcement that of a halt in the month-long campaign of aerial strike, most people in the capital, Sana’a, are staying indoors and adopting a “wait-and-see” attitude. In the city of Aden, the coalition’s announcement has sparked violence; ground fighting involving tanks is taking place throughout the city and militants are entering residential areas.

An office for an international organization was damaged by explosions as a result of shelling and aerial bombardments that took place in the vicinity of Aden airport, according to the OCHA report. 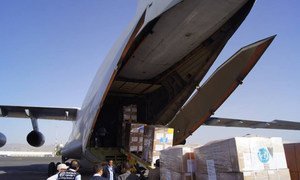 The health situation in Yemen is steadily deteriorating as escalating hostilities impede civilian access to critical health services, according to a spokesperson for the World Health Organization (WHO).