The United Nations World Health Organization today warned that progress towards global vaccination targets for 2015 is “far off track,” with one in five children still missing out on routine life-saving immunizations that could avert 1.5 million deaths each year from preventable diseases.

The warning comes as many countries worldwide have experienced large measles outbreaks in the past year, threatening efforts to achieve the global target of eliminating measles in three regions by the end of this year.

“It is critical that the global community now makes a collective and cohesive effort to put progress towards our six targets back on track,” Dr. Flavia Bustreo, WHO Assistant Director-General, Family, Women's and Children’s Health said just ahead of World Immunization Week, which runs from 24 to 30 April.

World Immunization Week creates a focused global platform to reinvigorate our collective efforts to ensure vaccination for every child, whoever they are and wherever they live,” the WHO doctor was quoted as saying in a press release issued today in Geneva, where the UN health agency is headquartered.

WHO noted that nearly 22 million infants in 2013 missed out on the required three doses of diphtheria-tetanus-pertussis-containing vaccines (DTP3), many of them living in the world’s poorest countries, and called “for an end to the unnecessary disability and death caused by failure to vaccinate.”

All 194 WHO member States at the World Health Assembly endorsed in 2012 the Global Vaccine Action Plan, a commitment to ensure that no one misses out on vital immunization, but a new independent assessment report on progress rings an alarm bell, warning that vaccines are not being delivered equitably or reliably.

“Only one of the six key vaccination targets for 2015 is currently on track,” WHO said.

The Plan recommends three key steps for closing the immunization gap: integrating immunization with other health services, such as post-natal care for mothers and babies; strengthening health systems so that vaccines continue to be given even in times of crisis; and ensuring that everyone can access vaccines and afford to pay for them.

Dr. Jean-Marie Okwo-Belé, WHO Director of Immunization, Vaccines and Biologicals, pledged the Organization will work to increase its support to all countries that are lagging behind in meeting immunization targets.

Next month, WHO will bring together high-level representatives of 34 countries with routine vaccination coverage of less than 80 per cent to discuss the challenges faced by countries and to explore solutions to overcome them.

“Although progress has stalled in recent years, this early success demonstrates the potential of vaccines, which are increasingly being extended from children to adolescents and adults, providing protection against diseases such as influenza, meningitis and cervical and liver cancers,” WHO said in its release.

A global collaborative drive for immunization begun in the mid-1970s achieved dramatic results, raising vaccination levels from as low as 5 per cent to more than 80 per cent in many countries by 2013, resulting in immunizations preventing between 2 and 3 million deaths annually, according to WHO.

The Global Vaccine Action Plan envisions a world where everyone lives life free from vaccine preventable diseases by 2020. It had set six targets for 2015:

Target: 90% immunization coverage against diphtheria, tetanus and whooping cough by 2015.

Target: At least 90 low or middle income countries to have introduced one or more under-utilized vaccines by 2015.ON TRACK

Target: Eliminate from three WHO regions by end-2015

Gap: 16% of all children are not being immunized against measlesRubella elimination

Target: Eliminate rubella from two WHO regions by end-2015

Gap: Half of all children do not receive the rubella vaccine

♦ Receive daily updates directly in your inbox - Subscribe here to a topic.
♦ Download the UN News app for your iOS or Android devices.
vaccine 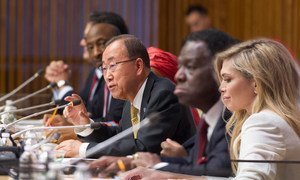