The World Food Programme today drew attention to the disappearance of three of its staff members who went missing earlier this month when fighting reportedly erupted along their food distribution route in volatile Malakal South Sudan, where more than 2 million people are unsure of where their next meal is coming from.

“We are extremely worried about the fate of our missing colleagues and are working hard for their safe return,” WFP Executive Director Ertharin Cousin said in a press release issued today. “Our staff take enormous risks every day to bring vital aid to people in critical need.”

According to WFP, their disappearance comes after another WFP staff member was abducted at gunpoint in October 2014 from the airport in Malakal in South Sudan and hasn’t been heard from since.

WFP fears that worsening insecurity in some parts of South Sudan will make it harder for humanitarian agencies to reach conflict-affected communities with badly needed assistance, just as the lean season is set to begin.

They were traveling in a convoy from Malakal to Melut, carrying food intended for thousands of conflict-affected people, when witnesses say intercommunal fighting erupted along the road on which they were traveling. WFP lost contact with the three men and has not heard from them since, despite intense efforts to reach them.

The agency also noted that because of increasing concerns about staff safety, it is re-assessing its ability to work in some parts of Upper Nile state. According to the press release, WFP plans to temporarily reduce its operations in those areas where it no longer believes it’s safe to work.

“We regret that we must temporarily suspend food assistance in Akoka and Fashoda counties,” said WFP Deputy Country Director Eddie Rowe, in Juba, South Sudan. “We hope to resume as soon as we have the necessary assurances that our staff and partners can work safely.”

The UN says that 10 humanitarian workers have been killed in Upper Nile state since the start of South Sudan’s conflict more than 16 months ago.

“We are equally concerned about the welfare of innocent people, particularly women and children, who are suffering the consequences of this conflict,” Ms. Cousin said. “We are committed to assisting the South Sudanese people the best we can, but we cannot do our lifesaving work unless national and local authorities are willing and able to safeguard humanitarian staff.”

According to WFP, 2.5 million people in South Sudan started this year unsure of where their next meal is coming from. Food security analysts believe this number will increase with the start of the lean season in May. WFP aims to assist roughly 3 million people throughout the country in 2015.

The WFP has raised its most recent concerns as the UN Mission in South Sudan (UNMISS) reports that fighting erupted in Malakal on Tuesday evening and continued throughout most of the morning and early afternoon. The residence of the Upper Nile state governor was reportedly shelled by mortar rounds and two of his security officers were also wounded.

At least 1,500 unarmed civilians have arrived at the UN protection site outside Malakal, which brings the total numbers of civilians being protected there to that particular site to 28,000 people. 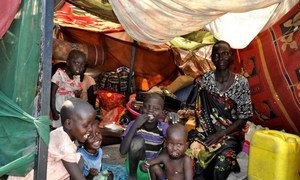 The United Nations Deputy Special Representative for South Sudan visited Malakal today, meeting with local officials and community leaders of some 26,000 internally displaced people (IDPs) who are being sheltered by the UN Mission in South Sudan (UNMISS).