The prospects of a two-State solution in the Middle East are getting dimmer with potentially explosive consequences for the entire region, United Nations Secretary-General Ban Ki-moon warned today as he urged the international community to boost efforts at bringing both Israeli and Palestinian delegations back to the negotiating table.

“Over the years, we have seen determined efforts to achieve a comprehensive, negotiated peace based on a two-State solution,” the Secretary-General said this morning as he briefed a Security Council on the situation in the Middle East at a meeting chaired by Foreign Minister Nasser Judeh of Jordan, which holds the Council’s presidency for the month.

“Instead of peace, however, there have been decades of missed opportunities and failures that have come at an enormous cost.”

The Council meeting comes on the heels of Israel’s most recent election and the impending formation of a new Israeli Government but also a flare-up in tensions between the Government in Tel Aviv and the Palestinian Authority.

For over four months, the Israeli Government withheld over $470 million in Palestinian tax revenues, undermining the stability of Palestinian institutions and their ability to pay public sector salaries and provide needed services.

As of last Saturday, however, the UN confirmed that both sides had reached an agreement on the release of the tax revenues – a move in line with the Paris Protocol of the Oslo Accords.

The Secretary-General welcomed the agreement as a reversal of what was otherwise a “counterproductive” policy which, he said, “seriously undermines the ability of the Government of Palestine to carry out its responsibilities.”

The UN chief also urged the incoming Israeli Government to reaffirm Israel’s commitment to the two-state solution and to take credible steps to foster an environment conducive to a return to meaningful negotiations.

Despite some progress, however, Mr. Ban also voiced concern about the “fragile security situation, the lack of progress on intra-Palestinian reconciliation and the pace of reconstruction” in the Gaza enclave.

“Gaza is facing a crushing financial crisis,” he continued. “Public sector employees remain unpaid. The impact of the conflict and of extreme poverty on Palestinians in Gaza has been severe.”

As he urged international donors to support a second humanitarian payment to Palestinian civil servants in Gaza, the Secretary-General also drew attention to the UN-backed Gaza Reconstruction Mechanism – a “critical tool” aimed at alleviating the suffering of Gaza’s people and rebuilding the territory following last summer’s 51-day conflict between Israel and Gaza-based militants.

To date, he added, the Mechanism had enabled some 70 per cent of households in need of shelter repairs to procure the necessary materials which would otherwise be curtailed due to the enclave’s stringent blockade. Additionally, 60 of the 130 projects funded by the international community and the private sector had been approved by Israel and six were currently underway.

“These are promising developments, yet the needs remain enormous,” cautioned Mr. Ban. “Despite the generosity of some donors, critical funding gaps threaten stability.”

Against that backdrop, the Secretary-General described a situation of simmering tensions in the West Bank amid continuing clashes between Israeli security forces and Palestinians and the destruction of Palestinian-owned structures.

Such realities feed the frustration and tension in a vicious cycle that undermines the path to peace, he declared.

“The international community must do more to promote a return to negotiations that will end nearly half a century of occupation and allow two States, Israel and Palestine, to live side by side in security in peace,” Mr. Ban concluded.

“Both sides face difficult choices. But one choice stands above all: whether to choose peace or the death, destruction and suffering that has defined the conflict for far too long.” 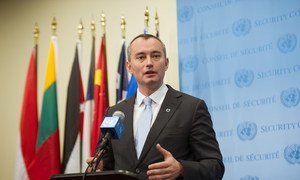 The United Nations official charged with coordinating the Middle East peace process has welcomed the announcement that an agreement has been reached on the release of Palestinian tax revenues by Israeli authorities – a move in line with the Paris Protocol.