Looking ahead to the World Humanitarian Summit in Istanbul next year, the United Nations Secretary-General today stressed how news stories were serving to compel the international community into agreeing to align major global commitments to support the world’s most vulnerable people.

“Today’s headlines have brought new reminders of why the Summit is needed,” said Ban Ki-moon as he briefed UN Member States on the Summit, set to be held next May. “The death of hundreds of migrants off the coast of Libya is not only deeply saddening – it should shock the global conscience.”

Noting that more migrants had died in 2015 so far than died on the Titanic, he drew attention also to the attack today on UN Children’s Fund (UNICEF) workers in Somalia, which he said showed the great peril that humanitarian and development workers face around the world.

Stressing the need for solidarity with and heightened support for migrants fleeing war and persecution, he added a call to ensure that humanitarian personnel have the security they need to carry out their vital work.

He said the World Humanitarian Summit would be a key element of the new global agenda for change and action, alongside the September special summit on the post-2015 sustainable development agenda and the December climate change conference in Paris.

“We look to the World Humanitarian Summit to generate strong global support for bold changes in humanitarian action,” he said. “This is the only way we will meet the enormous challenges we face in the coming years and decades. The world is changing, and we need to make sure we change with it to meet the needs of those affected by crisis in a timely and effective manner.”

“The number of people in need of humanitarian assistance around the world has doubled in just ten years,” Mr. Ban noted. “More people are displaced by conflict than at any time since 1945. That figure stands at over 51 million. People displaced within their countries because of conflict are now displaced for an average of 17 years. Millions of children are out of school, sometimes for years. And the situation is getting worse.”

He said that a billion people could be displaced because of climate change by 2050, with more than 40 per cent of the global population living in areas of severe water stress. Additionally, economic losses from natural disasters were likely to increase dramatically from the $300 billion currently lost annually.

‘Our challenge is clear: we must act now to strengthen our efforts,” he said. “The World Humanitarian Summit, and the consultations leading up to it, aim to build a more inclusive, diverse and truly global humanitarian system.”

He said regional consultations were providing the building blocks for the changes that must be made at the global, regional and national levels to reaffirm the principles that guide humanitarian work. The Summit would need to focus the world’s attention on people caught in crisis, especially those that may have receded from the spotlight but where suffering remains acute.

“We have the skills, resources, tools and technology,” he said. “Together, we can create a world where human suffering from crises is vastly reduced.” 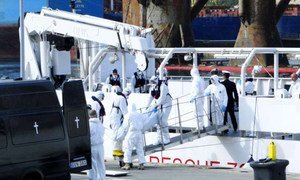 Following the loss of some 700 lives after a boat carrying migrants capsized and sank over the weekend, the UN human rights chief has urged European Union (EU) governments to take a “more sophisticated, more courageous and less callous approach” to coping with the flows of migrants towards Europe.