Following the loss of some 700 lives after a boat carrying migrants capsized and sank over the weekend, the UN human rights chief has urged European Union (EU) governments to take a “more sophisticated, more courageous and less callous approach” to coping with the flows of migrants towards Europe.

“As we learn of yet more men, women and children who have lost their lives in their search for better and safer lives abroad, I am horrified but not surprised by this latest tragedy. These deaths and the hundreds of others that preceded them in recent months were sadly predictable,” UN High Commissioner for Human Rights Zeid Ra’ad Al Hussein said in a statement.

“The [deaths] are the result of a continuing failure of governance accompanied by a monumental failure of compassion,” he added.

“While Italy’s ‘Mare Nostrum’ programme, which ended last October, was a valiant, and in many ways successful, effort to save lives, the scaled-down ‘Operation Triton’ is simply not fit for purpose,” said Mr. Zeid, emphasizing that it is totally inadequate and "more geared to border control and policing the seas than to saving lives.”

Stopping the rescue of migrants in distress has not led to less migration, nor indeed to less smuggling, but merely to more deaths at sea, he said, stressing that Triton should immediately be replaced by a European-wide, State-led and well-resourced search and rescue capability in the Mediterranean.

“We have repeatedly underscored that no one who has food to eat, who is safe from torture, and rape, and from falling bombs, who has healthcare for his family, education for her children, decent and productive work would readily embark on these perilous journeys,” he added.

Europe is “turning its back” on some of the most vulnerable migrants in the world, and risks turning the Mediterranean into a “vast cemetery” rather than acknowledge that European economies and societies need the low-skilled labour that migrants are desperate to contribute, and that refugees have a right to seek asylum, Mr. Zeid said.

Lack of regular channels, coupled with harsh controls at external borders, has led migrants to turn to the increasingly organised smuggling industry along Europe’s southern borders, he said.

“It is time for politicians to show courageous leadership on this issue, instead of joining the mindless clamour for ever harsher deterrence policies. Not only do such policies not work, they operate at an unacceptable cost in terms of human lives,” the High Commissioner said.

In a separate statement, UN experts said that the repression of irregular migration clearly cannot be the only solution to the recurrent grave problem of masses of people drowning at sea. “The unnecessary deaths over the past few days are just the beginning. Europe must act innovatively to save lives,” said François Crépeau, the Special Rapporteur on the human rights of migrants.

“We are talking about people dying unnecessarily when States have the capacity to save lives,” he added. “If Europe is to witness a significant reduction of human suffering at borders, it must bank on regulated openness and mobility. Otherwise the number of migrants risking their lives on unseaworthy vessels over perilous sea routes can only increase.”

“Moreover, those surviving their perilous journey find themselves in a situation of social vulnerability and often fall prey to unscrupulous or criminal recruiters or employers, exploiting them in slavery-like conditions,” cautioned Maria Grazia Giammarinaro, the Special Rapporteur on trafficking in persons, especially women and children.

Mr. Crépeau and Ms. Giammarinaro both said that it is important to bring to justice unscrupulous smugglers for the suffering they inflict on irregular migrants, but warned that “Europe will find it difficult to defeat resourceful and adaptable smuggling rings, unless it destroys their business model, which was created when barriers and prohibitions to mobility were erected and which thrives at evading restrictive migration policies of many EU Member States.”

The Special Rapporteur on the human rights of migrants will present a report on his visit to Italy and a thematic report on EU border management to the UN Human Rights Council in June 2015.

Earlier in the day, Secretary-General Ban Ki-moon called the death of hundreds of migrants off the coast of Libya a “shock to the global conscience.” The Mediterranean is fast becoming a “sea of misery” for thousands of migrants, he said.

“And this truly titanic humanitarian tragedy highlights yet again the need to address the plight of migrants, to crack down on the criminals who exploit the most vulnerable, and to strengthen rescue capacity in the Mediterranean and elsewhere,” Mr. Ban said. 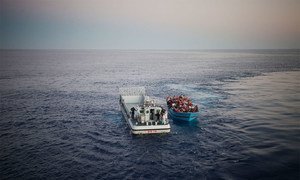 United Nations Secretary-General Ban Ki-moon has expressed shock and deep sadness at the news of the latest boat capsizing in the Mediterranean Sea in which hundreds of people are feared lost, adding that such a catastrophic event provides yet another indication of the need for a “robust” rescue-at-sea mechanism aimed at preventing future tragedies.