“The future well-being of the world’s indigenous peoples is a crucial part of this critical year,” the Deputy Secretary-General declared. “Now is the time for indigenous peoples to be at the forefront of a transformative agenda that leaves no one behind.”

Referring to last year’s World Conference on Indigenous Peoples, Mr. Eliasson praised the gathered delegates for having achieved a “historic milestone” in the relationship between indigenous peoples and Member States, adding that the two parties had set the direction for a strengthened partnership.

Member States, he said, had reaffirmed their support for the UN Declaration on the Rights of Indigenous Peoples and agreed to a set of goals and commitments on health, education, land, and livelihoods, while also agreeing to address the participation of indigenous peoples at the UN.

This year’s Forum – which is scheduled to run for two weeks and concludes on 1 May – will similarly focus on the economic, social and cultural rights of indigenous peoples, continued Mr. Eliasson, who added that as the UN Declaration affirms the rights of indigenous peoples to health, education, clean drinking water and sanitation, it also states that such services be provided in ways that are “culturally appropriate.”

“Let us strive to ensure that the economic, social and cultural rights of indigenous peoples are fulfilled – rights that are essential to basic dignity and even to survival,” he concluded. “I count on all of you – Member States, Indigenous Peoples and other partners – to make change happen and stand up for a life of dignity for all.”

Meanwhile, addressing those gathered, General Assembly President Sam Kutesa also celebrated the “spirit of partnership and mutual respect” that had brought indigenous delegates and Member States together in tackling issues critical to the numerous indigenous communities worldwide and which had resulted in last year’s “visionary” Outcome Document.

“Experience has shown that through open engagement and dialogue, Member States and indigenous peoples can find common ground and solutions,” Mr. Kutesa declared from the podium.

“Owing to the unparalleled cooperation that took place, we have an Outcome Document that lays out firm commitments by Member States to take concrete actions on addressing the rights and well-being of indigenous peoples set out in the UN Declaration on the Rights of Indigenous Peoples.”

With the UN system preparing its landmark post-2015 development agenda, Mr. Kutesa also acknowledged that indigenous delegates would have an added opportunity to “change our world for the better” beyond the Forum’s predetermined agenda which will include addressing issues affecting youth, including self-harm and suicide.

“Together, we must spare no effort to put in place a framework for development and international cooperation that improves the everyday lives of people worldwide, including indigenous peoples,” he continued.

“The contributions, knowledge and wisdom of indigenous peoples are of major importance as we seek to address the world’s sustainable development challenges.” 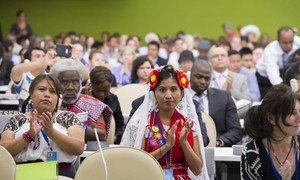 Indigenous peoples must be a part of the ongoing process to define a global development agenda beyond 2015, United Nations officials said today, calling for explicit assertion of their collective rights as well as the promotion of traditional knowledge to tackle issues such as climate change, as the UN Permanent Forum on Indigenous Issues opened its 2014 session.