“Cybercrime has become an established threat to the security of States and individuals alike,” Loide Lungameni, Chief of the Organized Crime and Illicit Trafficking Branch in the UN Office on Drugs and Crime (UNODC), told a high-level event on the topic.

Continuing, she warned those gathered for the 13th UN Congress on Crime Prevention and Criminal Justice that in the near future, due to ever-increasing global connectivity, it will become hard to imagine a form of cybercrime – or perhaps any crime – that does not involve electronic evidence.

According to UNODC, threats to Internet safety have spiked dramatically in recent years, and cybercrime now affects more than 431 million adult victims globally.

Cybercrime exists in many forms, the most common being identity-related offences. This occurs by ‘phishing’ (deceiving Internet users into giving their personal information), the dissemination of ‘malware’ (software that disrupts computer systems and collects personal or sensitive information) and hacking (illegally accessing someone’s computer remotely).

Criminals tend to use these methods to steal credit card information and money. Moreover, the Internet has become a breeding ground for criminal activity related to copyright and intellectual property rights, as well as offences such as child pornography and abuse material.

For the past two years, UNODC, under its programme for cybercrime, has been delivering technical assistance to law enforcement authorities, prosecutors, and the judiciary, in three regions of the world, in Eastern Africa, South-East Asia, and Central America.

The agency has emphasized that developing countries lack the capacity to combat cyberattacks and other forms of cybercrime. Criminals also exploit countries’ legal loopholes and weak security measures to perpetrate cybercrimes.

“The main objective of the programme is to respond to identified needs in developing countries by supporting Member States to prevent and combat cybercrime”, Ms. Lungameni explained.

UNODC works with international partners in carrying out this technical assistance, including the International Telecommunication Union (ITU), the Commonwealth Secretariat, the World Bank, Interpol, and Europol.

At another meeting, Jinyong Chung, senior counsel for the World Bank, stressed how important it is for international organizations and their partners to combat cybercrime.

“We all know that cybercrime is a not an easy issue to deal with. But if we do nothing, just because it is very hard to deal with, it causes other risks,” he said.

He added that the Bank’s mission in combating cybercrime is “to build capacity among policymakers, legislators, public prosecutors and investigators and civil society in developing countries, in the policy, legal and criminal justice aspects.”

“We are trying to achieve this goal through synthesizing international best practices in these areas”, he said, adding that the World Bank has developed a virtual library which gathers all what is available regarding cybercrime issues. This virtual library will be open to the public.

The head of Cybercrime Program Office in the Council of Europe, Alexander Seger, said in another session that capacity building is crucial as an effective way to address the challenge of cybercrime.

The private sector is also involved in combating cybercrime and a side event discussed public-private partnership about it, with the participation of Microsoft Corporation.

In an interview with UN Radio, the head of the Microsoft Digital Crime Unit for Middle East and Africa, Dale Waterman, said: “We are trying ultimately to create a safer digital world for our customers.”

As such, Microsoft is focusing its efforts on malware and vulnerable populations, “who tend to be the young and the less tech-savvy…and the elderly. With the young, we are developing ways in which child exploitation abused images can be removed from the Internet,” he explained.

♦ Receive daily updates directly in your inbox - Subscribe here to a topic.
♦ Download the UN News app for your iOS or Android devices.
telecommunication 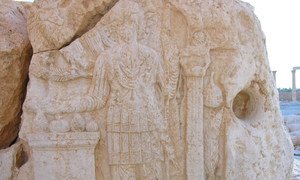 Weighing in on the vital importance of the world’s cultural artifacts and the illegal trade that endangers them, experts at an event held at the United Nations Crime Congress, under way in Doha, Qatar, urged Member States to use the existing legal instruments to fight this crime and stressed the importance of raising awareness.