WHO/N. Alexander
Tuesday 14 April 2015 was a happy day in Sierra Leone as children returned to school after many months away, due to the Ebola outbreak.
16 April 2015

Intense efforts to control the Ebola outbreak in the three most-affected West African countries in will continue, the United Nations health chief said in Washington, DC today, adding that the international community is also looking for ways to build on dramatic recent progress by aiding with efforts aimed at recovery from the outbreak.

“The goal is to help people and their communities to return to a normal life again,” said Margaret Chan, Director-General of the World Health Organization (WHO). “It means that children are going back to school, women can once again shop in their local markets, and livelihoods are restored.”

She placed particular importance on rebuilding health systems and services to reduce risks that were inherent within weak systems. Such rebuilt systems should cover basic, essential, primary healthcare with sensitive surveillance to give early warnings of any dangerous outbreaks.

“The health systems in the three countries were fragile to begin with,” Dr. Chan acknowledged. “They collapsed during the Ebola outbreak.”

She said trust and confidence must be restored to ensure that parents immunize their children, pregnant women have confidence in giving birth safely and so malaria and other infectious diseases can be prevented.

Bruce Aylward, Assistant Director-General of the WHO provided some impressions of the outbreak response from the front-lines. He underlined the importance of building resilient systems and helping the most-affected States – Guinea, Liberia and Sierra Leone – to recover. Yet, he stressed that it would be impossible to fully recover if the main task – eradicating Ebola – was not completed.

“Success is not assured,” he said. “There is a terrible, terrible and growing sense that this is done. This is not done. It started with one case. There were 37 cases last week. It is not done.”

While pointing to “stunning” progress in reining in the outbreak and meeting ambitious targets on reducing prevalence of Ebola, including the effort to limit new cases to coastal areas that would be easier to control as the rainy season looms, Dr. Aylward stressed the difficulty associated with those efforts.

“It’s been 12 grinding months to get here but that’s where we’ve arrived right now,” he said. “It’s a bumpy road but it is going in the right direction.”

David Nabarro, the UN’s Special Envoy on Ebola, stressed how tough the global response to the “frightening devastation” wrought by Ebola has been throughout the process so far.

“It’s a cause of insecurity that needs to be taken as seriously as terrorism,” he said. “It needs defences as well financed and organised as terrorism.” 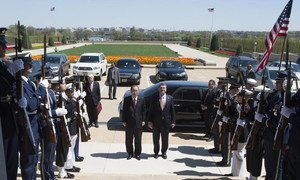 In Washington, UN chief calls for immediate ceasefire by all parties in Yemen

During a speech delivered at the National Press Club in Washington, D.C. this evening, United Nations Secretary-General Ban Ki-moon underlined the gravity of the situation in Yemen, saying the country in “in flames” and pointing out how the current crisis is multiplying the already high levels of suffering and insecurity faced by many in the population.