In Washington, UN chief calls for immediate ceasefire by all parties in Yemen

UN Photo/Eskinder Debebe
On a visit to Washington, D.C., Secretary-General Ban Ki-moon (left) is greeted by US Defense Secretary, Ashton Carter, at the Pentagon.
16 April 2015

During a speech delivered at the National Press Club in Washington, D.C. this evening, United Nations Secretary-General Ban Ki-moon underlined the gravity of the situation in Yemen, saying the country in “in flames” and pointing out how the current crisis is multiplying the already high levels of suffering and insecurity faced by many in the population.

“Even before the latest escalation, two out of three Yemenis relied on humanitarian assistance,” Mr. Ban said. “Levels of food insecurity were higher than the in the poorest stretches of Africa.”

Hundreds have been killed while deliveries of humanitarian supplies were being blocked and UNICEF recently reported that one third of fighters in the country were children.

“That is why I am calling for an immediate ceasefire in Yemen by all parties,” Mr. Ban said. “It is time to support corridors for lifesaving aid – and a passage to real peace. The United Nations-supported diplomatic process is the best way out of a drawn-out war with terrifying implications for regional stability.”

Making a special plea on behalf of Palestinians in the Yarmouk refugee camp in Damascus, the Secretary-General said those civlians are “caught between the military machine of the Syrian Government and the brutality of extremist groups, Da'esh/ISIL [Islamic State of Iraq and the Levant].” They have little way out – and aid can find little way in, he said, stressing that he has been working very hard recently to ensure the nearly 18,000 people trapped in the camp are protected.

Mr. Ban turned to several others examples of places adding to the millions of people suffering from the devastating consequences of Government failures, human rights violations and unbearable, including Syria and Nigeria.

Among UN efforts to build a safer and more sustainable world is the role the Organization would play in ensuring implementation of the nuclear deal worked out between the international negotiators and Iran, and the UN's plan of action on preventing violent extremism, which would be launched in the autumn.

“We are working closely with the Alliance of Civilizations, an initiative that aims to counter those who prey on alienation and seek to divide,” he said. “We must ensure that counter-terrorism efforts respect human rights and international humanitarian law. As we have seen time and again, overreaction is the extremists' best recruiting tool.”

Despite such challenges, Mr. Ban stressed that there are many opportunities also available for pursuit, particularly on the back of progress made in the past 15 years connected to the Millennium Development Goals (MDGs) on poverty, disease and education.

“Our challenge now is to finish the job,” he said, noting that this is why UN Member States are working very hard to shape a post-2015 development agenda, “which will be able to address the whole spectrum of our world.

Beyond a focus on shared prosperity and harmony with the planet, the new agenda will also emphasize the crucial role of justice, institutions and fundamental freedoms. And for the first time, the goals will apply to all countries; even the richest are witnessing rising inequality, and no country has ended violence and discrimination against women.

He is hopeful having seen consensus emerge on 17 people-centred sustainable development goals and he called for a focus on justice and human rights at the same time as prioritizing climate change.

“There are still some people who do not want to acknowledge the problem…but by any standard, scientific evidence clearly tells us that climate change is happening, is approaching much, much faster than they expected, the UN chief explained, adding: “We have to take action now. It may be too late, but it will not be too late if we take action now.”

Referring to the “strong moral dimension” of the effort, he announced that he would visit the Vatican later this month and meet with Pope Francis to discuss common concerns, including the encyclical on the environment that he plans to issue in the months ahead.

“We are the first generation that can end poverty, and the last that can take steps to avert the worst impacts of climate change,” he said, underscoring that 2015 is "a year...of ambitious decisions for humanity.”

Wrapping up his remarks, the Secretary-General noted that this year's 70th anniversary of the United Nations falls at a time when the world faced major decisions that will shape lives for generations to come.

“This is a time of test but far more one of tremendous opportunity. As the distinctions between the national and the international continue to fall away, we can and must come together to chart a course towards a safer and more sustainable future for all of us,” the UN chief declared.

Earlier in the day, the Secretary-General met with members of the US House Foreign Affairs Committee and discussed the work of the United Nations on many issues of mutual concern, including Ebola, climate change, Syria and Yemen. He also had a working lunch with the United States Defense Secretary, Ashton Carter.

Mr. Ban will continue his visit to Washington tomorrow and over the weekend. On Friday and Saturday, he is expected to attend a series of side events, including on Ebola, climate change and financing for development, among other topics, as well as attend the official Spring Meetings of the World Bank Group and the International Monetary Fund.

He will also speak at the Global Citizens Concert being held on the Washington Mall on Saturday before returning to New York. 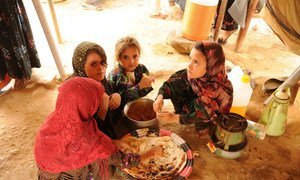 The United Nations World Food Programme (WFP) announced today that it will, along with partners, reach some 105,000 displaced people in Yemen’s main southern city of Aden over the next few days, while warning that with millions in need amid the deepening crisis, its supplies are now running low.