UNSMIL
Special Representative for Libya and head of UNSMIL, Bernardino León (at podium) holds press conference at the start of Libyan political dialogue in Morocco.

16 April 2015
A new round of political dialogue on Libya, hosted by Morocco and facilitated by the United Nations Support Mission (UNSMIL) in the country began in Skhirat, Morocco, today, aiming to end the crisis in the country.

Since the last round of talks ended on 26 March, participants have had the opportunity to consult with their constituencies and key stakeholders on a proposal on a comprehensive solution to end the conflict in Libya and in Skhirat, parties are expected to present their remarks regarding the overall framework outlined in the Draft Agreement on the Political Transition in Libya.

“The main goal of this round that we start today is to agree with all the participants on what could be a final document,” said Bernardino León the Special Representative of the Secretary-General for Libya. “Parties should be aware that we will try to achieve the maximum they can get, and that after this round of talks it will be very difficult to get more than that.”

Mr. Leon stressed that the dialogue process represents an important opportunity for Libyans to stop the bloodshed and end their suffering and he joined UNSMIL in urging them to seize the opportunity to put their country back on the road to stability and prosperity.

“I would like to start today by calling on the parties to be flexible, to be generous, to be ready to make concessions,” said Mr. León. “They cannot get everything, that’s obvious. Or we can also reach the point in which they think it is not enough and it is better to continue in the situation Libya is today. I Hope this will not be the case.”

Mr. León said he hoped negotiators understood the urgency of agreeing the main elements for the unity Government and he added that further work would go on to talk with armed groups.

“It is very important to listen to them, to explain what we are doing because there won’t be a final solution for Libya if the armed groups are not involved,” he said “We are equally working with Egypt to prepare the meeting of the tribes, which is also a very important track.”

While remaining positive about the prospects for success if participants remain realistic and align their aims with a changed mood in the country, Mr. Leon condemned in the strongest terms airstrikes that took place this morning on Metiga airport.

“Nobody can accept that there are airstrikes in a moment in which one of the delegations is taking off coming to the dialogue,” he said. “It is an extremely negative move. I’m not going to say only that this in unacceptable. Of course, it is unacceptable. But we hope that there will be an investigation [into] who is behind this attack and we hope that an explanation will be given to the international community.”

Mr. Leon pointed to other recent incidents that painted a grim picture of where Libya is currently, including reports of the sinking of a boat carrying 400 migrants and bombs against the Korean and Moroccan embassies. 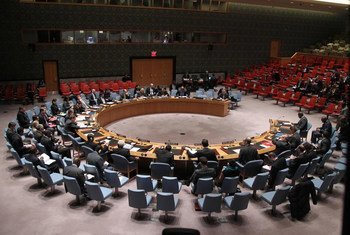 15 April 2015
The United Nations Security Council has condemned “in the strongest terms” the recent series of terrorist attacks against the embassies of the Republic of Korea and Morocco in the Libyan capital of Tripoli.