Despite impressive progress in raising school enrolment over the past decade, one in four children and young adolescents in the Middle East and North Africa (MENA) are either out of school or at risk of dropping out, according to the United Nations Children’s Fund (UNICEF).

“At a time of such change and turmoil, this region simply cannot afford to let 21 million children fall by the wayside,” Maria Calivis, Regional Director for UNICEF MENA, said today in a statement from Beirut.

“These children must be given the opportunity to acquire the skills they need through education in order to play their part in the region’s transformation,” she added.

According to a joint report released by UNICEF and the UN Educational, Scientific and Cultural Organization (UNESCO), a 40 per cent reduction in the number of out-of-school children in the MENA region over the past decade provided hope and opportunities for millions.

Progress has, however, recently slowed due to a combination of poverty, discrimination, poor quality learning and conflict.

Governments need urgently to scale up their efforts, notably to prioritize the education needs of disadvantaged families. New policies are needed to scale up pre-primary education programmes, tackle student drop-out and gender discrimination, and help more children in conflict areas get access to learning.

“We need targeted interventions to reach the families displaced by conflict, the girls forced to stay home and the children obliged to work,” said Silvia Montoya, Director of the UNESCO Institute for Statistics.

For their part, donors must commit more funds to close disparity gaps that keep so many children out of the classroom, the report argues.

A further three million children are out of school in Syria and Iraq, where conflict has destroyed large parts of the education system. As the violence expands, millions more are at risk of becoming a ‘lost generation’ deprived of the knowledge and skills needed to be successful adults.

Several other countries around the region are experiencing armed conflicts or political turmoil that prevents children from learning.

The report underlines why girls are not in school and how they are at particular risk of dropping out due to social attitudes, early marriage, and a lack of female teachers. On average, a girl in the MENA region is 25 per cent less likely to be in school than a boy. Meanwhile, among adolescents, high drop-out rates are fuelled by poor education standards and low quality school environments.

The report comes at a crucial time as it will feed into the efforts of the international community on crafting the post-2015 education goals.

The Middle East and North Africa (MENA) Out-of-School Children Initiative (OOSCI) is part of a global Initiative launched by UNICEF and the UNESCO Institute for Statistics in 2010. Its objective is to identify barriers that contribute to exclusion from education and analyse the existing strategies related to enhanced school participation. 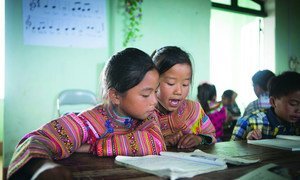