15 April 2015
United Nations Secretary-General Ban Ki-moon today called on business leaders to expand investment in low-carbon growth and opportunities to advance sustainable energy for all and tackle climate change, in a statement to The Future of Energy Summit 2015, organized by Bloomberg New Energy Finance.

Noting that global investment in renewable power and fuels in 2014 spiked by more than 15 per cent over 2013, with investments in developing countries growing by more than a third, he pointed out that renewable energies still contribute less than 10 per cent of global electricity, but that incentives can shift this forward.

“I am here to urge you to take action for sustainable energy," Mr. Ban said.

Currently one out of five people lives without access to electricity, and nearly 40 per cent of the world’s population rely on wood, coal, charcoal or animal waste to cook and heat their homes, leading to over four million deaths each year from the effects of indoor smoke. Addressing this while also reducing greenhouse gas emissions and tackling climate change is a crucial challenge.

Mr. Ban pointed to the new UN-led Global Energy Efficiency Accelerator Platform which aims to double efficiency by 2030, save more than a gigaton of carbon emissions a year and save tens of billions of dollars.

“These significant sums are just part of what is possible. I count on your help to realize the enormous potential out there,” he said, recalling that the private sector, at the Climate Summit last September, announced plans to mobilize over $200 billion in financial assets towards low-carbon and climate-resilient development.

In line with the trend, Mr. Ban said he hoped that the Paris Climate Conference in December would only succeed with a credible climate finance package. To put the global economy on a path to low-carbon growth, he called for carbon pricing, the phase-out of inefficient fossil fuel subsidies and stronger energy efficiency standards.

Mr. Ban also announced that the UN will convene the second annual UN Sustainable Energy for All Forum in May in New York, working with the World Bank and other key partners. The first-ever Global Energy Ministerial will be held on 20 May, gathering leaders from government, business and civil society for cutting-edge discussions on key energy issues, including financing.

Launched by the UN Secretary-General in 2011, the Sustainable Energy for All initiative, a multi-stakeholder partnership, aims to achieve three inter-linked global targets namely to ensure universal access to modern energy services, to double the global rate of improvement in energy efficiency and to double the share of renewable energy in the global energy mix, all by 2030.

At the UN, governments have already identified sustainable energy as one of the new generation of sustainable development goals that are expected to be adopted in September.

Also speaking at today’s event, Kandeh Yumkella, the Special Representative of the Secretary–General and Chief Executive of the Sustainable Energy for All Initiative (SE4All), called on the private sector to seize the opportunity by innovating and investing to help achieve the initiative’s objectives.

“The speed and scale of interventions we need to transform our current energy system and ensure shared prosperity lie in the private sector,” said Mr. Yumkella. 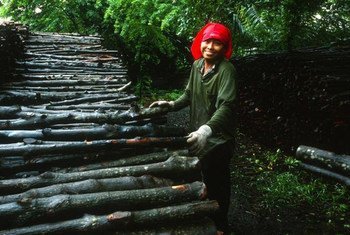 20 March 2015
The sustainable management and conservation of forests must be included in the sustainable development goals and climate change agreement to be adopted later this year, United Nations officials stressed ahead of the International Day of Forests, observed worldwide on 21 March.