Tennis legend and gender equality activist Billie Jean King has had a stellar career in sports, identifying the boundaries that divide people and tearing them down. She was the first woman athlete to win over $100,000 in prize money in 1971 and, 10 years later, the first professional athlete to be “outed” as gay. She remains a steadfast supporter of issues at the heart of the United Nations – fair play, tolerance and building “a world where we are all united; no borders.”

Indeed, despite the hurdles that she encountered on and off the court, the idea of social inclusion has always formed the core of Ms. King’s personal and professional philosophy – a philosophy that brings sports and human rights issues together in an effort to harmonize understanding. The more we get to know each other, she says, the better chance the world has for peace.

In an interview earlier this morning and ahead of the commemoration of the International Day of Sport for Development and Peace, held at UN Headquarters in New York, Ms. King, a lesbian, gay, bisexual and transgender (LGBT) rights icon, told the UN News Centre that human rights and sports are, in fact, “a perfect fit” for each other.

“The great thing about sports is that it really has no borders. It’s a way to connect with others from other cultures. It’s a way to develop,” she explained. “And it gives me a chance to have a platform, to speak out on what I feel is the right thing, about human rights.”

Athletes, Ms. King continued, have a unique platform to bridge communication divides, establish themselves as role models, and lead by example. And, as individuals with such a global opportunity to influence, athletes also have a special responsibility to “try to help make a positive difference in this world.”

“We have a platform that very few people have. If you’re at the top of your sport, you can do so much good in this world because so many people are exposed to you,” she added.

In Ms. King’s personal and professional narrative, there was no greater platform than the 1973 tennis match against Bobby Riggs.

Dubbed the “Battle of the Sexes,” it pitted her against a male counterpart in a widely televised tennis clash that helped redefine gender roles and level the playing field shared by both men and women.

“Two months before the match I was a mess and I got less and less anxious as I got closer. I knew it was about social change. I knew it wasn’t a tennis match,” she admitted.

Until the early 1970s, Ms. King observed, gender quotas throughout the United States had severely impeded women’s access to athletics and higher education, limiting their growth and development and starving younger generations of girls of much-needed role models.

“When I played Bobby Riggs, I knew I wanted to win that match to help change the hearts and minds of people,” she continued. “The great thing about that match is that it brought people together and also it awakened a lot of people to start thinking differently about women; that they deserve as much as men.”

For Billie Jean King, women and girls had always been invisible, side-lined and underserved to the benefit of their male equals who, even in schools and at a young age, were always placed “up front and centre.”

“Even at school, for instance, in the classroom, the teachers would always call on the boys. They just would,” she recalled. “So at a very young age I had an epiphany that I would spend the rest of my life fighting for equal rights and opportunities for everybody: men and women, boys and girls. And I knew that because of tennis I had a platform and I was one of the lucky ones.”

Ms. King’s arrival at the United Nations comes at a propitious moment as the Organization shifts into overdrive ahead of this year’s roll-out of the post-2015 sustainable development agenda and a new global initiative to reduce gender inequality by 2030.

“The UN has such a unique opportunity. Just the idea of the United Nations – it says it all. We’re all united, no borders,” Ms. King declared.

“The UN is such a great influencer. The whole world is connected to it. The most important thing it does is bring people together – it allows for dialogue, for thinking how we can develop for the future, and how we can bring about peace.” 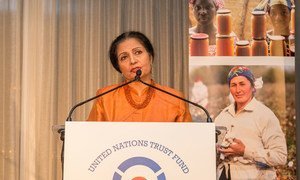 Twenty years ago in Beijing, countries signed on to a comprehensive global blueprint for gender equality and women’s empowerment, and achieving that goal remains “humanity’s biggest project,” according to senior United Nations official Lakshmi Puri.