As the great moral issue of our time, sexual violence in conflict is used to terrorise, displace and subjugate victims, the Special Representative of the Secretary-General on the issue told the Security Council today, urging the body to take action to deal with this growing threat.

“The history of warzone rape has been a history of denial. It is time to bring these crimes, and those who commit them, into the spotlight of international scrutiny” Zainab Hawa Bangura said as she presented to Council members the Secretary-General’s 2015 report on Sexual Violence in Conflict.

Stressing that the time has come “to send a clear message that the world will not tolerate the use of sexual violence as a tactic of war and terror,” she told Council members that the text before them today served not only as an annual report of record, “but as a global advocacy instrument and vehicle for refining our common understanding of critical themes, to enhance coordination and build global consensus.”

“For the first time, (the report) articulates how sexual violence is integrally linked with the strategic objectives, ideology and finding of extremist groups, noting therefore that women’s empowerment and sexual violence prevention should be central to international response,” she explained.

The annual report sheds light on a number of new themes, including a list of 45 parties, mostly armed groups, suspected of committing sexual violence as a tactic to terrorise. It also links sexual violence in conflict with forced dispossession of land and property and the denial of women to vital sources of livelihood.

It also highlights the vulnerability and targeting of ethnic and religious minorities, including LGBTI individuals by armed groups, who are keen on imposing morality and exert social control.

The Special-Representative heads to the Middle East tomorrow to meet with survivors, refugees and Government officials in Syria, Iraq, Jordan, Lebanon, and Turkey.

“The visit is undertaken against the backdrop of a catastrophic new trend of the use of sexual violence as a ‘tactic of terror’ by extremist groups, not only in Iraq and Syria, but also in Somalia, Nigeria and Mali,” Ms. Bangura said.

The emergence of such armed groups spotlights political and operational challenges that lie ahead in terms of engaging with some of these parties, for concrete and time-bound commitments in line with Security Council resolutions. Ms. Bangura also underscored the Secretary-General’s recommendation that the Al Qaeda/Islamic State of Iraq and the Levant (ISIL) Sanctions Committee includes sexual violence as part of its designation criteria.

Ultimately, an effective counter-strategy to this emerging threat would include intensive community-level engagement, including with women and civil society, youth groups, traditional and faith-based leaders, the Special Representative said.

And progress has already been made, Ms. Bangura said. Over the past two years, the international community has signed frameworks of cooperation with the African Union and the International Conference of the Great Lakes Region, and are now moving toward similar lines with the League of Arab States. A number of regional organizations have also appointed envoys on women, peace and security.

At the country level, the Governments of Angola, Guinea, the Central African Republic, Democratic Republic of the Congo (DRC), Somalia and South Sudan have all pledged to address sexual violence, through the signing of Joint Communiques with the United Nations outlining priority areas of intervention.

“These commitments were undertaken at the highest levels of Government, and are the basis for implementation plans that are now being developed by national authorities in concert with the United Nations and other partners,” Ms. Bangura pointed out.

It is also notable, she said, that there were 187 convictions of soldiers and Commanders in the DRC between July 2011 and December 2013, and as noted in the report, this ear there were 135 convictions by military tribunals. UN expert teams are also supporting national progress in Colombia, Côte d’Ivoire and South Sudan. 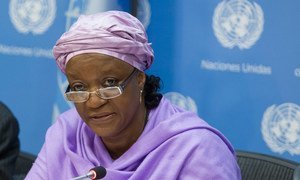 Those who use rape as a weapon of war are becoming increasingly “brutal and ruthless,” the Special Representative of the United Nations Secretary-General (SRSG) on Sexual Violence in Conflict said today, warning against a lax attitude that would allow emerging armed groups to gain further ground and continue committing such atrocious crimes.