A second meeting of Libyan political parties and activists, facilitated by the United Nations Support Mission in Libya (UNSMIL), concluded its deliberations today in Algiers by reiterating the commitment to political dialogue as the only option to resolve the crisis in Libya.

At the opening session in the Algerian capital on 13 April, was jointly presided over by the Special Representative of the Secretary-General for Libya and head of UNSMIL, Bernardino León, who also updated the participants on the various tracks of the Libyan political dialogue process.

Mr. León noted that the participation of new personalities from across the diverse political and social spectrum could only enrich the ongoing discussion and overall dialogue process, according to a statement released by UNSMIL.

He said that today, participants reaffirmed their call to all parties to immediately halt armed hostilities and create a conducive environment for the Libyan dialogue, and stressed that a comprehensive solution for the crisis in Libya can only be achieved through such dialogue.

Participants also expressed grave concern over the escalation of terrorist acts, which threaten national security and underscored the need for concerted efforts to combat all forms and manifestations of terrorism as represented by Ansar Al-Sharia, Da'esh and Al-Qaeda, regardless of motives. They also stressed the need to take all necessary steps to combat such terrorist threats in Libya.

Also, participants expressed the need for all other tracks, which articulate the views and tendencies of broad and diverse sections of the Libyan people, to join efforts in support of the main political track that aims to reach a comprehensive solution for all political and security aspects of the crisis in Libya.

Expressing broad support for the overall framework outlined in the 'Draft Agreement on the Political Transition in Libya', UNSMIL said participants put forward a number of constructive and positive ideas to enhance the draft agreement. They also underlined the importance of reaching a comprehensive solution for all manifestations of the crisis in Libya, including political and security aspects.

They stressed the need to expedite the agreement on the formation of the government through an agreed action programme and interim security arrangements that include a ceasefire, as well as monitoring arrangements for the removal or arms and the dissolution of all armed groups according to a national plan on disarmament, demobilization and integration in civil and security institutions.

Participants in today's talks also reiterated that the primary responsibility is with the State in implementing the security arrangements outlined in the draft political agreement. Underscoring the importance of the principle of inclusivity, the meeting stressed the need for adequate mechanisms to engage all segments and components of the Libyan people as equal partners in the efforts to rebuild the new Libya. They affirmed the need to promote policies that respect diversity and denounce all kinds of discrimination and exclusion.

UNSMIL reports that the parties also called on all parties to redouble their efforts and mobilize quickly to alleviate the humanitarian suffering endured by a large segment of the Libyan people, especially displaced persons and refugees, and to address problems relating to the delivery of humanitarian aid.

They condemned violations of human rights law, and specifically noted the need to find a prompt solution for those detained outside the law and abductees. 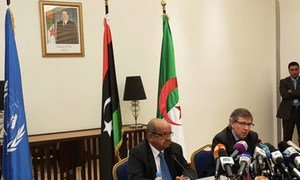 In Algeria, UN envoy opens latest round of talks between Libyan leaders, activists

Libyan stakeholders must give the country’s United Nations-facilitated peace process a chance in order for a political solution to take hold and end the ongoing fighting in the North African nation, the head of the UN Support Mission in Libya (UNSMIL) has declared.