UNRWA
A mother and child receive UNRWA food assistance at the distribution areas in Yalda, on the southern outskirts of Damascus to the west of the Yarmouk Camp.
14 April 2015

Despite huge challenges in getting access, the United Nations Children's Fund (UNICEF) has managed to deliver much-needed humanitarian supplies to Qamishli in north-east Syria, a spokesperson for the agency said today.

UNICEF has managed to deliver 43 trucks containing humanitarian provisions to the town, spokesperson Christophe Boulierac told reporters in Geneva, noting that the trucks had passed through the Nusyabin crossing point in Turkey over the past few days with supplies to assist 2.3 million people in need.

Contained in the shipments are water treatment products, hygiene and baby kits, water purification tablets, washing powder and soap, diarrhoea disease sets, and midwifery kits and the delivery comes at a critical time when access all over Syria remains a major challenge for UNICEF and other humanitarian actors.

Mr. Boulierac quoted Hanaa Singer, UNICEF Representative in Syria, who said: “The delivery is a significant break-through but it is certainly not enough and we would need more to reach children impacted by the conflict across the country especially those living in hard-to-reach areas.”

Meanwhile, the Commissioner General of the UN Relief and Works Agency for Palestine Refugees in the Near East (UNRWA), Pierre Krähenbühl, wrapped up a humanitarian mission to Damascus, during which he held a meeting with the Syrian Deputy Foreign Minister, Faisal Miqdad, as part of the joint UN effort.

UNRWA spokesperson Chris Gunness said Mr. Krähenbühl underlined the importance of resuming distributions to civilians remaining in or unable to leave the Palestinian refugee camp of Yarmouk; of ensuring the safe exit of those civilians wishing to temporarily leave the camp; and of broadening the humanitarian response to those civilians from Yarmouk who have arrived in areas in the immediate vicinity of the camp.

According to Mr. Gunness, the Syrian Government responded positively and Mr. Krähenbühl reported that UNRWA had been able to distribute humanitarian supplies.

“Access yesterday and today to civilians from Yarmouk who arrived in nearby Yalda is a positive development and the result of dialogue with the government,” said Mr. Krähenbühl. “UNRWA hopes to build on this in coming days.”

Welcoming the Government's close cooperation with the Office of the UN Special Envoy for Syria, Mr. Gunness stressed that he is well aware of the fact that the situation remains critical for thousands of civilians, and he stressed that the agency would spare no effort in finding ways to assist civilians inside Yarmouk and to further improve the support to those who have fled the camp.

He would be following developments in the coming days very closely, he said, reiterating UNRWA's call for all possible measures to be taken to ensure respect for and protection of Palestinian and Syrian civilians inside Yarmouk. He also drew attention to the fact that civilians in several other Palestine refugee camps in Syria also face extreme hardship. 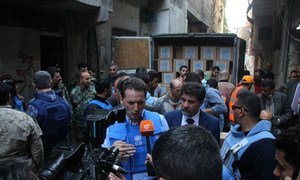 The thousands of Palestinian and Syrian refugees trapped in the Yarmouk refugee camp have suffered “untold indignities” amid intensifying hostilities between armed groups in the area, the United Nations agency concerned with the well-being of Palestinian refugees declared today.