Amidst a tentative political transition, the situation in the Central African Republic (CAR) remains tenuous as sectarian tensions continue to simmer and the severity of the country’s humanitarian crisis increases, the top United Nations official in the African country warned today.

In a briefing to the Security Council, the Secretary-General’s Special Representative, Babacar Gaye, told the 15-member body that swathes of the CAR’s population remain at risk from attacks by the Muslim Séléka alliance and the Christian anti-Balaka militia as the two groups continue to wage hostilities in the country’s ongoing civil conflict.

In addition, he said, the country had witnessed an uptick in the number of internally displaced persons (IDPs) with 50,000 new IDPs registered since the beginning of the year.

Nevertheless, Mr. Gaye pointed to the holding of “historic local consultations,” completed in March, which had offered CAR citizens “an opportunity to express their views on issues at the heart of the crisis, including justice and reconciliation, peace and security, governance, and socio-economic development priorities.”

He explained that despite disagreements between the country’s Government and the National Transition Council over plans to hold later in the month the so-called Bangui Forum on reconciliation, the UN Mission in the CAR, known by its French acronym MINUSCA, had managed to defuse tensions and promote “an approach based on consensus.”

The completion of the Forum would ultimately be “another milestone” in the CAR’s transition, the UN official added.

“Commitments on the part of all national stakeholders, including political and military leaders of armed groups, are critical to keep the transition on track and open the way toward next steps in the transition process, including the organization of elections and the launch of longer term national reconciliation efforts,” he said.

Meanwhile, Mr. Gaye also observed that the country’s political transition had reached a “critical stage” as national stakeholders scramble to organize credible elections which, he said, would mark the end of the country’s transition. A number of challenges – ranging from the registration of IDPs and refugees outside the country to security and financial challenges – continued to plague the process and he urged Member States to promptly respond to funding shortfalls which were affecting the “timely completion of the electoral process.”

More than two years of civil war and sectarian violence have displaced thousands of people in CAR. According to UN estimates, nearly 440,000 people remain displaced inside the country while some 190,000 have sought asylum across the borders. At the same time, more than 36,000 people remain trapped within the landlocked country in enclaves from which they hope to find asylum in neighbouring States.

Moreover, the UN Food and Agricultural Organization (FAO) recently reported that some 1.5 million people in CAR remain food insecure amid ongoing hostilities throughout the country and cautioned that the figure was likely to rise should immediate support not be provided.

“Restoring security, promoting an inclusive political dialogue and completing the transition is just the beginning of the CAR’s long journey towards stability and sustainable development,” Mr. Gaye told the Council.

“The international community has a moral obligation to help the CAR and its people stay the course towards peace and reconciliation. It is our collective responsibility.” 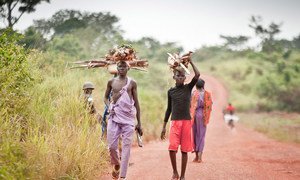