UN Photo
A view from a rally held in May 2014 in Lagos, calling for the return of over two hundred Nigerian secondary school girls abducted in April by the extremist group Boko Haram.
14 April 2015

On the one-year anniversary of their abduction by the extremist group Boko Haram, the kidnapped girls of Chibok, Nigeria must not be forgotten, United Nations Secretary-General Ban Ki-moon declared today as he reiterated his call for their immediate release and safe return to their families.

“While some of the girls were fortunate to have escaped, the fate of many still remains unknown,” Mr. Ban said in a statement issued by his spokesperson.

Some 276 girls were abducted by Boko Haram from their school in Chibok, located in Nigeria’s restive north-eastern Borno state, in April 2014, as the militant group ramped up brutal attacks targeting the African country’s children.

Since then, Mr. Ban said, hundreds of thousands of children had been displaced from their homes and deprived of their rights to live and grow up in safety, dignity and peace.

According to a report released yesterday by the UN Children Fund (UNICEF), Missing Childhoods, more than 300 schools were damaged or destroyed and at least 196 teachers and 314 schoolchildren killed by the end of 2014 as a result of the conflict in northeast Nigeria between Boko Haram, military forces and civilian self-defence groups.

“Going to school should not have to be an act of bravery,” the Secretary-General’s statement continued. “The children of north-eastern Nigeria and neighbouring countries must be allowed to live in peace and enjoy their right to a safe education.”

As the Government of Nigeria and regional powers ramp up their legitimate offensive against Boko Haram, Mr. Ban reminded all those involved that their response to the extremist group’s attacks “must be fully consistent with international law and not create additional risks for the protection of children.”

“On this day, I reaffirm my support to the governments and peoples of the region in the fight against Boko Haram,” the statement concluded. “I stand in solidarity with the families of all abductees, especially children, their communities and society at large.” 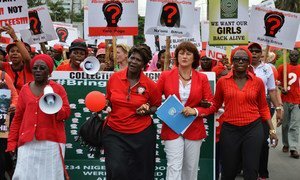 Marking 100 days since the brazen abduction of schoolgirls in Chibok, Nigeria, by Boko Haram terrorists, United Nations Secretary-General Ban Ki-moon reiterated his call for their immediate release, while expressing his full support for the worldwide vigils taking place today.