UNICEF/NYHQ2015-0477/Esiebo
Aisha pretends to draw at the tip of a pencil painted on a wall mural in a camp for internally displaced people in Yola, the capital of Adamawa.
13 April 2015

A new report released by the United Nations Children’s Fund (UNICEF) reveals that least 800,000 children have been forced to flee their homes as a result of the conflict in northeast Nigeria between Boko Haram, military forces and civilian self-defence groups.

Released a year after 200 girls were abducted in Chibok, UNICEF’s Missing Childhoods reveals that the number of children running for their lives within Nigeria, or crossing over the border to Chad, Niger and Cameroon, has more than doubled in just less than a year.

“The abduction of more than 200 girls in Chibok is only one of endless tragedies being replicated on an epic scale across Nigeria and the region,” says Manuel Fontaine, UNICEF Regional Director for West and Central Africa. “Scores of girls and boys have gone missing in Nigeria – abducted, recruited by armed groups, attacked, used as weapons, or forced to flee violence. They have the right to get their childhoods back.”

The Missing Childhoods report outlines how the conflict is exerting a heavy toll on children in Nigeria and across the region in an increasing number of ways. As well as being killed, maimed and displaced, children are being used within the ranks of Boko Haram – as combatants, cooks, porters and look-outs.

Young women and girls are being subjected to forced marriage, forced labour and rape, while students and teachers are being deliberately targeted. More than 300 schools were damaged or destroyed and at least 196 teachers and 314 schoolchildren killed by the end of 2014. 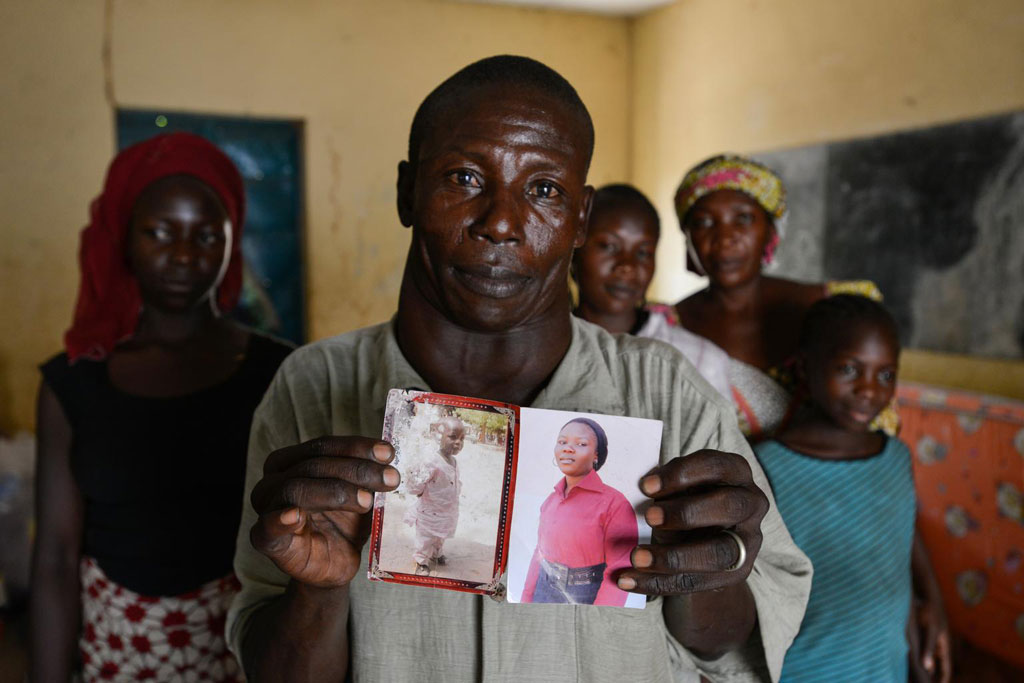 Hassan Adamo stands with the remaining members of his family. He is holds photographs of his eldest daughter and son who were kidnapped by members of Boko Haram during an attack on the family’s village. Photo: UNICEF/NYHQ2015-0638/Rich 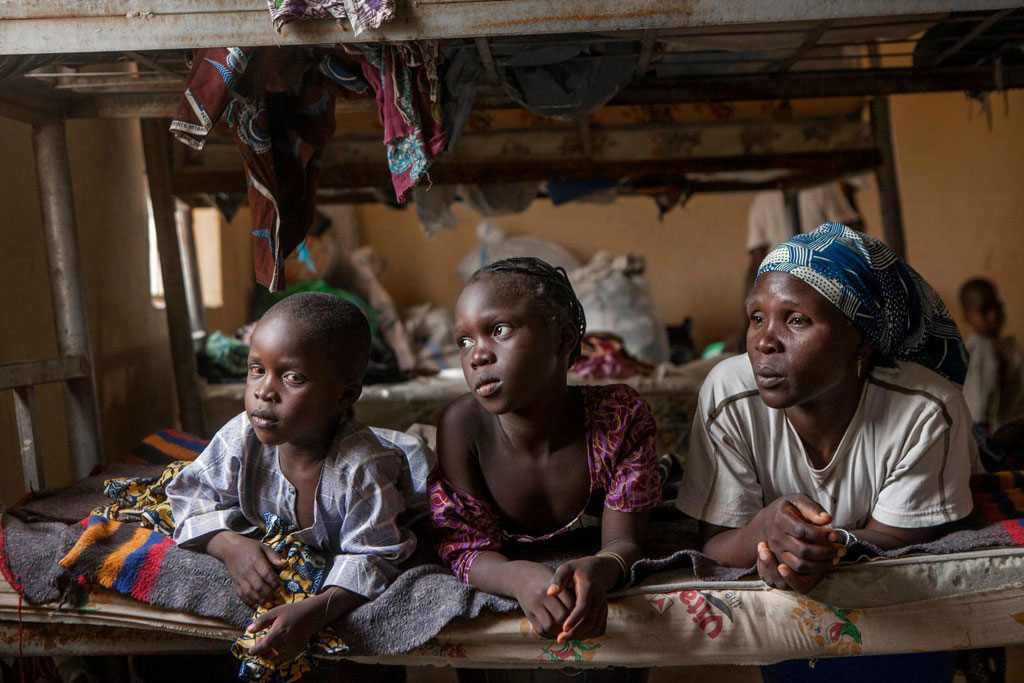 Rose Zeeharrah lies with her daughter and son in a camp for internally displaced persons. They moved there after their home village was attacked by Boko Haram and killed the men who lived there, including Rose’s husband. Photo: UNICEF/NYHQ2015-0474/Esiebo 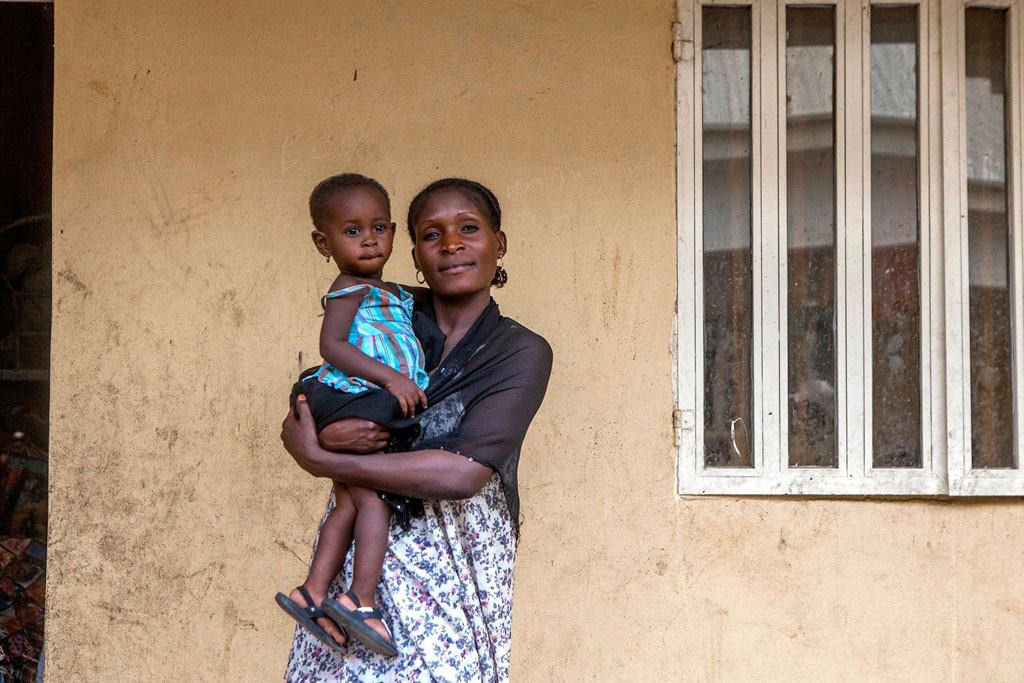 Maryamu Yakudu holds her 1-year-old daughter, Hyladan, in a camp for internally displaced people, in Yola. Normally she would have been in church when Boko Haram attacked her hometown but she was home sick that day. She has not seen her husband since and fears the worst. Photo: UNICEF/NYHQ2015-0480/Esiebo 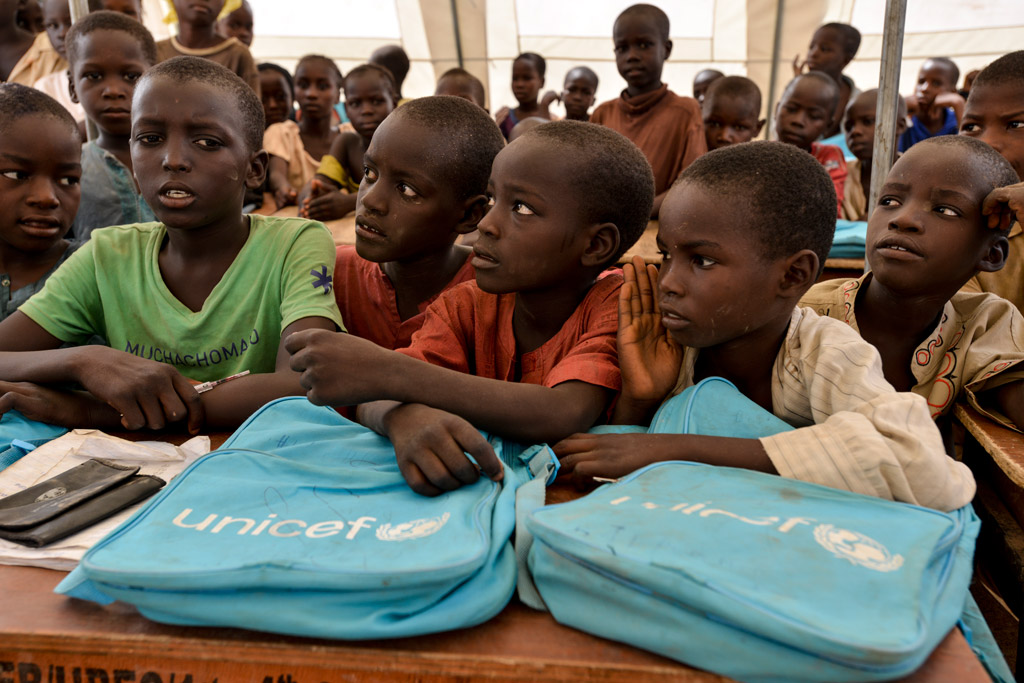 Children attend a UNICEF-provided tent classroom, in the Gire 2 camp for internally displaced people, near Yola, the capital of Adamawa, Nigeria. Photo: UNICEF/NYHQ2015-0605/Rich

In response to the crisis, UNICEF has stepped up its humanitarian response over the past six months, providing over 60,000 children affected by the conflict in Nigeria, Niger, Cameroon and Chad with counselling and psychosocial support to help them ease the pain of their memories, reduce stress and cope with emotional distress.

The agency is also working with partners to provide safe water and life-saving health services, to restore access to education by creating temporary learning spaces, and to deliver therapeutic treatment to malnourished children.

In order to maintain its relief efforts in Nigeria and neighbouring countries, UNICEF is urging international donors to ramp up their financial support, as the agency is facing a severe funding shortfall. It has received only 15 per cent of the $26.5 million required for its humanitarian response in Nigeria for 2015, and no more than 17 per cent of its appeal for Cameroon, 2 per cent for Niger and one per cent for Chad.

UNICEF has released its report at the same time as it makes efforts to draw attention to the devastating impact of the conflict on children across the region using the hashtag #bringbackourchildhood. As part of that drive, UNICEF is using Snapchat – a social platform where messages appear briefly – to highlight the plight of the hundreds of thousands of children who are missing out on their childhoods as a result of the conflict.

To tell the stories of the children who have fled the violence, UNICEF and leading Snapchat artists will share images based on drawings made by children in Nigeria, Chad, Niger and Cameroon. The artwork reflects what children miss from home and the emotional wounds and suffering they have endured, including seeing their parents and siblings killed, tortured or abducted.

As Nigeria gets set this weekend to hold its Gubernatorial and State Assembly elections, United Nations Secretary-General Ban Ki-moon congratulated the country’s people and Government on the peaceful manner in which the recent presidential and parliamentary elections were held and expressed the hope that similar conditions will prevail during the new polls.