Libyan leaders, activists to meet under auspices of UN as crisis escalates in country's west

UNHCR/L. Dobbs
An estimated 400,000 people are displaced across Libya, including this man at a site near the capital, Tripoli.
11 April 2015

A meeting of Libyan political leaders and activists facilitated by the United Nations Support Mission in Libya (UNSMIL) will take place in Algeria tomorrow, 13 April, with hopes of devising a plan to end Libya's crisis, which is said to have 'gravely' escalated in the country's west.

“The role of political parties and political activists is important in lobbying the necessary support on all levels to achieve success for the dialogue and peace and stability for Libya,” said a statement released from UNSMIL today.

“This meeting is significant in that the leaders of political parties and activists will have the opportunity to analyse and enrich the documents that are being discussed,” it added.

Special Representative of the Secretary General for Libya and head of UNSMIL, Bernardino Leon is expected to update participants on the progress of the dialogue.

This meeting is a follow-up to an earlier one that took place March during which participants expressed strong support for dialogue as the way to resolve Libya's crisis peacefully. Past meetings have brought together representatives of Libyan municipalities and local councils in Geneva in January and in Brussels last month. The talks are aimed at including wide segments of Libyan society in the peace process.

“Dialogue is an opportunity for Libyans to stop the bloodshed and put their country back on the road to stability and prosperity that should not be missed,” the Mission note also said.

A meeting that brings together tribal personalities will convene at a later date in Egypt. The UN Mission in the country is also reaching out to military, security and armed groups leaders.

The Mission also released a statement yesterday, condemning the grave escalation in hostilities in western Libya, particularly in the Aziziya area in Warshafana, where it said people are enduring immense hardship, with many displaced, abducted, tortured and in need of aid.

“The Mission urges all parties to take all necessary measures to ensure the right of return for all those displaced from the area, and that none are illegally detained and prosecuted outside the scope of the law,” it added, calling for an end to the fighting so that residents can resume their normal day-to-day living.

“The Mission also reiterates its warnings to the warring parties that the targeting of civilians could amount to crimes punishable under international humanitarian law,” the note also said.

All parties in Libya must refrain from taking any military actions that could constitute a provocation in the current environment of heightened tensions and compromise neutrality.

Later this afternoon, Secretary-General Ban Ki-moon strongly condemned the attack on the embassy of the Republic of Korea in Tripoli, Libya by unidentified gunmen and sent his condolences to the families of the victims.

Mr. Ban recalled that the principle of inviolability of diplomatic and consular premises must be respected and expressed hope that the perpetrators of the attack will be swiftly brought to justice.

“The ongoing violence in Libya reminds us of the urgent need for Libyans to end the ongoing conflict, and to move quickly to agree on the formation of a national unity government,” Mr. Ban said in his statement.

To that end, he welcomed the resumption of Libya's political dialogue in the coming days.

Later in the day, members of the Security Council took note of the meeting and said they looked forward to the next round of talks in the Libyan dialogue in Morocco planned for 15 April, facilitated by the Special Representative of the Secretary General, Bernardino León.

The Council also strongly urged all Libyan stakeholders participating in the talks to agree on arrangements on the formation of a National Unity Government to end Libya's political, security and institutional crisis.

Expressing deep concern about the continuing violence in Libya, members reaffirmed that there can be no military solution to the crisis and called on all parties to cease hostilities to create a peaceful and conducive environment for an inclusive dialogue.

They also recalled resolution 2213 (2015) and emphasized that the Sanctions Committee is prepared to sanction those who threaten Libya's stability or undermine the successful completion of its political transition. 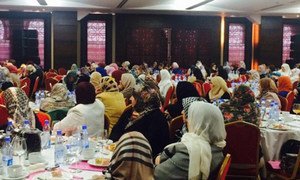 Libyan women have a crucial role to play in resolving the crisis in their country, a senior United Nations official said in an address to 250 Libyan women gathered in Tripoli, at a dialogue aimed at including women from all walks of life in the political process.