The Government of Vanuatu urgently needs funding to continue basic humanitarian relief efforts such as food, safe drinking water and shelter, according to the United Nations humanitarian mission helping the country respond to the effects of Cyclone Pam.

“I would like to congratulate the Government and people of Vanuatu for their tremendous efforts to overcome the devastating impact of the cyclone,” said Osnat Lubrani, the UN humanitarian coordinator for Vanuatu as she returned from an assessment mission. “However, there is no time for complacency. Basic life-saving assistance in support of local efforts is still urgently needed.”

Almost a month after the cyclone hit the archipelago of Vanuatu, the Government continues to lead the response to damage that included the destruction of more than 90 per cent of crops, and which left a population that relies heavily on subsistence agriculture without a source of income and the possibility of long-term food insecurity.

But with around 110,000 people with no access to safe drinking water – in some communities no sanitation facilities at all – and with 6,000 people still living in makeshift or temporary shelters in the most affected provinces, Ms. Lubrani urged partners to continue their support for relief efforts while also investing in recovery and reconstruction.

“Vanuatu will need a lot of help in rebuilding infrastructure, replanting of crops and providing communities with employment opportunities as the country gradually transitions to long-term recovery,” she said.

Relief efforts continue, focusing mainly on providing urgently needed shelter materials, food and safe drinking water, and health care, funded by the Flash Appeal, launched on 24 March, which seeks $29.9 million to cover the needs of 166,000 cyclone-affected people for three months. So far only $10.7 million – or 36 per cent – has been pledged.

Ms. Lubrani spoke after joining one of the 22 teams of Government disaster experts and response partners who assessed over 50 communities on all 22 affected islands to identify remaining response gaps and advise long-term planning of response and recovery efforts.

While relief efforts will continue over the next weeks, recovery activities have already started. The UN Development Programme (UNDP), in partnership with a number of other agencies, including the International Labour Organization (ILO), UN-Women and UN-Habitat, is in the process of developing a joint programme aimed at restoring livelihoods and building community resilience.

♦ Receive daily updates directly in your inbox - Subscribe here to a topic.
♦ Download the UN News app for your iOS or Android devices.
disaster|Vanuatu 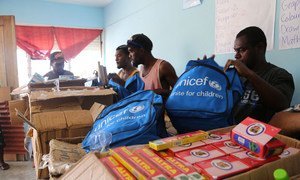 As schools reopen across the cyclone-battered nation of Vanuatu, 30,000 children will begin receiving targeted assistance in order to help them resume classes and continue with their studies, the United Nations Children’s Fund (UNICEF) announced today.