“The world has made tremendous progress towards 'Education for All'…however the agenda is far from finished,” said Irina Bokova, Director-General at the UN Educational, Scientific and Cultural Organization (UNESCO), on the heels of the key findings produced in the 2015 EFA Global Monitoring Report (GMR) .

Education for All 2000-2015: Achievements and Challenges, produced by UNESCO tracks the progress of a set of six goals ranging from improving quality of education to ensuring equal access to learning. Released today, the report found that 47 per cent of countries reached the goal of early childhood education, and another eight per cent were close. Twenty per cent were very far from the goal. Yet, in 2012, nearly two-thirds more children were enrolled in early childhood education than in 1999.

“Despite not meeting the 2015 deadline, millions more children are in school than would have been had the trends of the 1990s persisted,” Ms. Bokova said. “However…we need to see specific, well-funded strategies that prioritize the poorest – especially girls – improve the quality of learning and reduce the literacy gap so that education becomes meaningful and universal.”

At current rates, only half of all children in low-income countries are expected to complete lower secondary education by 2030. In many countries even the core goal of achieving universal primary education will remain out of reach without concerted efforts. 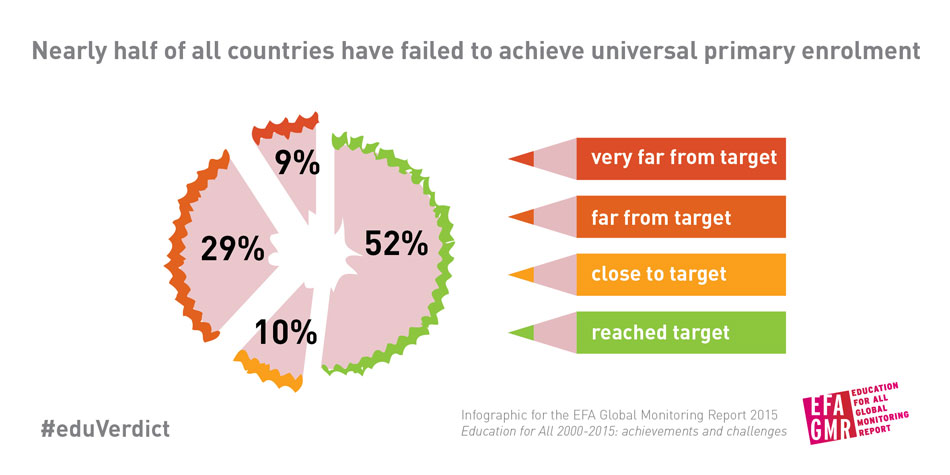 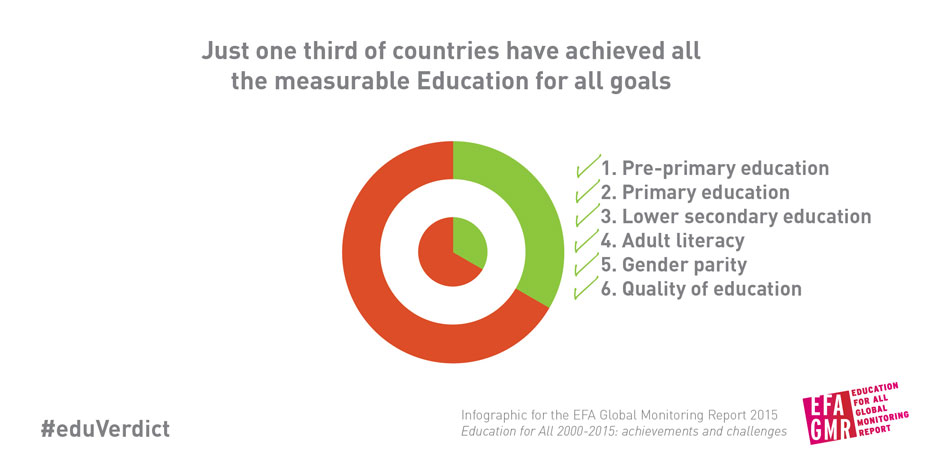 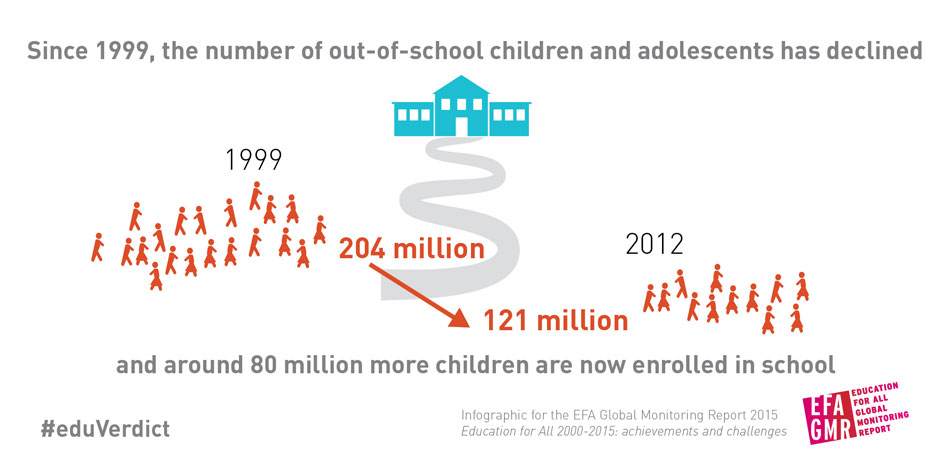 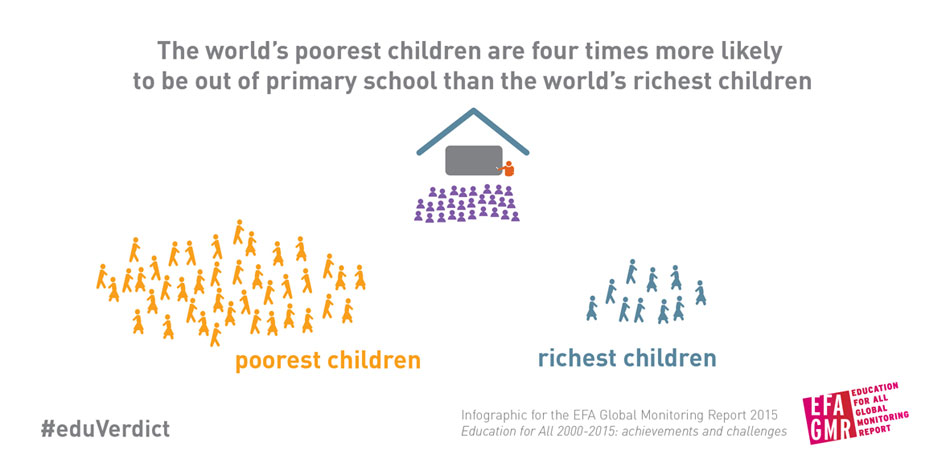 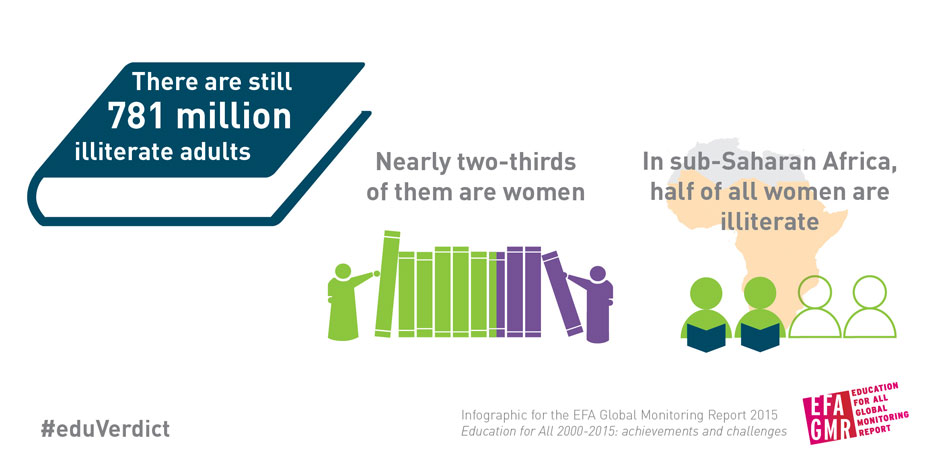 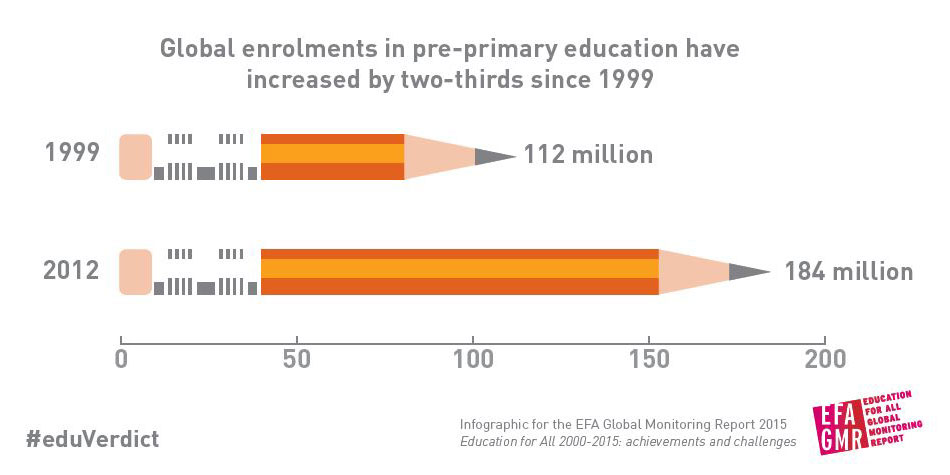 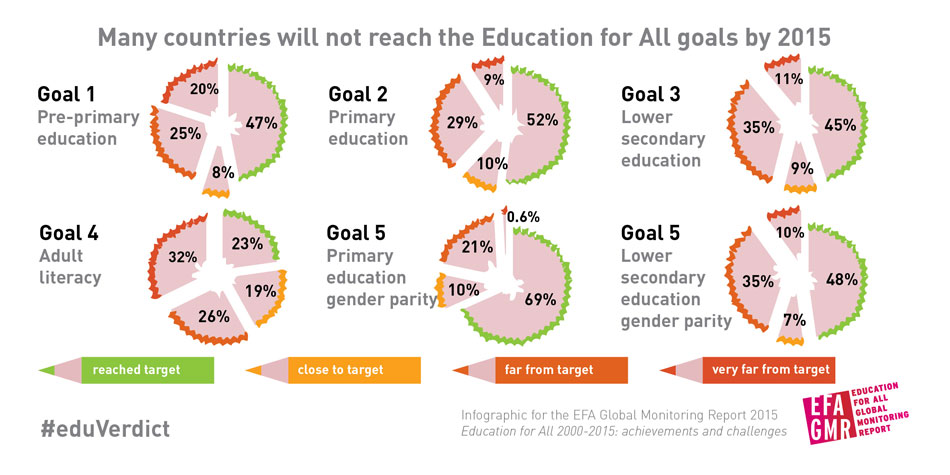 And yet UNESCO point out that there has been some important progress. Around 50 million more children are enrolled in school now than were in 1999. While education is still not free in many places, cash transfer and school feeding programmes have made a positive impact on enrolment for the poor. Forty-six per cent of countries reached universal lower secondary enrolment. Globally, numbers in lower secondary education increased by 27 per cent and more than doubled in sub-Saharan Africa.

In terms of achieving a 50 per cent reduction in levels of adult illiteracy by 2015, only 25 per cent of countries reached this goal, and 32 per cent remain very far from it. While globally the percentage of illiterate adults fell from 18 per cent in 2000 to 14 per cent in 2015, this progress is almost entirely attributed to more educated young people reaching adulthood. Women continue to make up almost two-thirds of the illiterate adult population. Half of sub-Saharan African women do not have basic literacy skills.

Gender parity will be achieved at the primary level in 69 per cent of countries by 2015. Child marriage and early pregnancy continue to hinder girls' progress in education as does the need for teacher training in gender sensitive approaches and curriculum reform.

The numbers of pupils per teacher decreased in 121 of 146 countries between 1990 and 2012 at the primary level, but 4 million more teachers are still needed to get all children into school. Trained teachers remain in short supply in one third of countries; in several sub-Saharan African countries, less than 50 per cent are trained.

In many countries, funding remains a major obstacle, the report finds. Governments must find ways to mobilize new resources for education and international partners must ensure that aid is distributed to those most in need.

“Unless concerted action is taken and education receives the attention that it failed to get during the past 15 years, millions of children will continue to miss out and the transformative vision of the new sustainable development agenda will be jeopardized,” said Aaron Benavot, the Director for today's report.

The report recommends that governments and civil society develop programmes to meet the needs of the most disadvantaged so no child is left behind in the post-2015 development targets for education, which must be specific, relevant and realistic.

Education should be free for all children and fees for tuition, textbooks, school uniforms and transport must be abolished. Policy makers should identify and prioritize skills to be acquired by the end of each stage of schooling. Literacy policies should link up with the needs of communities. Teacher training should be improved to include gender-focused strategies. Teaching styles should better reflect student needs and the diversity of classroom contexts. 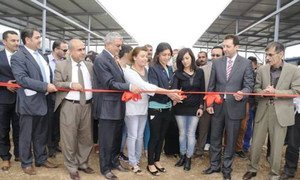 The United Nations education agency today celebrated the opening of a new school at Dawodiyah Camp in Dohouk, Iraq, as part of its efforts to provide quality secondary education to children and adolescents in internally displaced persons communities.