The international community needs a financial framework capable of confronting the multifaceted crises of the day in a predictable and effective manner if it is to delineate a successful post-2015 sustainable development agenda, United Nations Secretary-General Ban Ki-moon confirmed.

Delivering the opening remarks to the UN General Assembly’s Informal Interactive Hearing for the Third International Conference on Financing for Development today, the Secretary-General told the gathering of delegates and private sector professionals that channelling both public and private sector cash flows into sustainable development initiatives would be “crucial for securing an ambitious post-2015 agenda.”

“All sources of funding must be tapped – public and private, national and international,” Mr. Ban declared. “Domestic resource mobilization will be crucial.”

However, he noted, numerous obstacles in facilitating financing remained. In many countries, attempts to raise public resources through taxation continued to be hampered by loopholes, tax avoidance and tax evasion while private international capital flows also suffered from volatility.

In addition, the global financial crisis had further exposed the risks and underlying vulnerabilities in the international financial system, increasing inequalities, environmental challenges and rendering states susceptible to shocks such as the recent Ebola epidemic.

“The world needs an international financial framework that is predictable and effective in meeting these challenges and achieving sustainable and inclusive development,” continued Mr. Ban. “We invite the private sector to be our partners in supporting and financing this agenda, including through partnerships and collaboration.”

“While businesses should take into account profit and shareholder value, they have opportunities to realize long-term success contributing towards achievement of sustainable development, including through partnerships and collaboration with the public sector,” stated Mr. Emiliou.

He added that today’s hearing provided a “unique opportunity for an in-depth exchange of views” on important themes directly impacting the planet’s new development agenda.

“Mobilizing financing for critical infrastructure such as energy, transport, water and sanitation, as well as for [small and medium enterprises], is instrumental for structural transformation, economic growth, social inclusion and environmental sustainability,” Mr. Emiliou said.

Meanwhile, as he urged private sector leaders to join the UN and Member States at the upcoming Third International Conference on Financing for Development to be held in Addis Ababa later this year, Mr. Ban explained that the international system needed to create better incentives and a regulatory framework that would enable investors and companies to better align their strategies with economic, social and governance issues and report on their progress.

“We need to continue to expand partnerships with the business sector, civil society and other stakeholders, and to lever your resources and unique skills,” concluded the Secretary-General, who added that world sat at the brink of “a very important historic moment.”

“We need your advocacy, expertise, and ingenuity to make Addis Ababa a success and to chart a new era of sustainable development.” 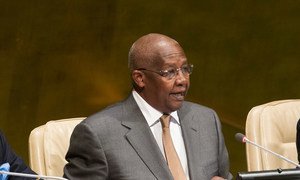 The next several months will present a historic opportunity to agree on an “inspiring” agenda that will directly improve the lives of people around the world, United Nations General Assembly President Sam Kutesa said today as he outlined his objectives for 2015.