The current escalation is “more desperate than ever” for civilians in Yarmouk displaced persons camp which is currently housing thousands of Palestinians on the outskirts of Damascus, the head of the United Nations agency concerned with the well-being of Palestinian refugees warned today.

“The situation has been turned upside down. Currently, it’s simply too dangerous to access Yarmouk,” said Pierre Krähenbühl, Commissioner-General at the UN Relief and Works Agency for Palestine Refugees in the Near East (UNRWA), as he briefed the press at UN Headquarters in New York via video-link.

“Right now, what is on the mind of people at Yarmouk is bare survival,” he added, recalling his visit to the camp several weeks ago. “I just saw people waking up with so much despair in their eyes, waiting for their meagre assistance.”

He spoke of “unbearable suffering” that he saw and civilians queuing up in line to get aid, scenes of elderly people saying that they’re hungry, and a pregnant woman in the queue fainting.

Earlier this morning, Mr. Krähenbühl, also via-video link, briefed the Secretary-General and Security Council on the unfolding situation in Yarmouk, a Palestinian Refugee camp near the Syrian capital.

He said during the briefing he called on international bodies to remain seized of the urgent situation and also called on parties to cease all activities that put civilians in danger and allow humanitarian access. Member States must also uphold the UN Charter.

Failure to do so could lead to the gravest and most appalling of consequences for the more than 18,000 civilians who have been trapped in Yarmouk for over two years. Since 1 April, it has been the scene of intense fighting and it is virtually impossible for civilians to leave, as any attempt to move in the open brings high risk.

Among the besieged residents of Yarmouk are 3,500 children, who have been reliant on UNRWA's irregular distributions of food and other assistance for over a year. In some areas interruptions of humanitarian operations has left thousands of people without aid for months.

And with the situation deteriorating even further, the unbearable environment must be addressed through human and political terms, he said. What is happening in Yarmouk is an opportunity for the international community to work together and use concerted action to influence behaviour.

On a regional level, he expressed gratitude to neighbouring countries for accepting Syrian refugees and also Palestinian in recent years, as well as most recently as fighting in Yarmouk continues.

“Many refugees have been displaced to other areas in Damascus – temporary shelters, schools, and our compounds,” he added.

But people must be protected and assisted wherever they are, and for those who do wish to leave Yarmouk, organizing the evacuation is important but incredibly challenging as violence and fighting between armed groups increases.

“This is highly complicated especially in an environment that is increasingly dangerous,” Mr. Krähenbühl said, adding that it is very difficult for civilians to move around freely. Moving a large group of people out of the camp is very challenging.

“However challenging that may look at the present, it may be the only way to save lives in Yarmouk,” he said, reminding that it is the responsibility of all parties to the conflict to protect civilians.

The international community must influence political and religious leaders to promote and uphold fundamental messages.

“Respect for life is not just an element of international law but also a fundamental principle. Leaders must exert their power to influence all parties to cease hostilities and reach a humanitarian truce,” he emphasized.

He recalled how UNRWA has been present in Syria for over 60 years dealing with the Palestinian refugee population throughout the country. During that time many of the Palestinians integrated into Syrian life, got jobs, became self-sufficient and sent their children to UNRWA schools.

“Now you have 95 per cent of the Palestinian population in Syria dependant on UNRWA,” he said.

♦ Receive daily updates directly in your inbox - Subscribe here to a topic.
♦ Download the UN News app for your iOS or Android devices.
palestin|yarmouk 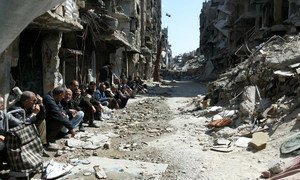