As Yemen conflict intensifies, UN relief chief urges all sides to do more to protect civilians

UNICEF
Children attend classes in Yemen, where over 600 schools have been damaged as a result of conflict.
2 April 2015

Extremely concerned for the safety of civilians caught in the midst of “fierce fighting” in Yemen, the United Nations Emergency Relief Coordinator called today on all parties involved to meet their obligations under international law and do their utmost to protect the ordinary women, children and men who are suffering the consequences of the conflict.

In a statement issued by her office this afternoon, Valerie Amos, who is also the Under Secretary-General for Humanitarian Affairs, said reports from humanitarian partners in different parts of the country indicate that some 519 people have been killed and nearly 1,700 injured in the past two weeks – over 90 of them children.

Further, Ms. Amos said tens of thousands of people have fled their homes, some by crossing the sea to Djibouti and Somalia. Electricity, water and essential medicines are in short supply.

“Those engaged in fighting must ensure that hospitals, schools, camps for refugees and those internally displaced and civilian infrastructure, especially in populated areas, are not targeted or used for military purposes,” she said.

Despite the grave dangers, she continued, United Nations agencies and humanitarian partners are coordinating with the Yemen Red Crescent and local authorities to deliver emergency health kits, generators so that people can get clean water, food and blankets.

“Before this recent escalation in the violence, millions of Yemenis were already extremely vulnerable. I hope that peace, security and stability will be restored as soon as possible,” Ms. Amos concluded.

The Emergency Relief Coordinator’s statement on the rising tide of violence in Yemen and the plight faced by civilians in the crisis-gripped country joins warnings issued by host of UN officials throughout the week, including Leila Zerrougui, Special Representative of the Secretary-General for Children and Armed Conflict, who just yesterday drew attention to the mounting number of child casualties, and urged all parties involved in military operations to “avoid creating new risks” for Yemen’s children and to adhere to international law.

In addition, this past Tuesday, Zeid Ra’ad Al Hussein, the UN High Commissioner for Human Rights, said the situation in Yemen was extremely alarming, with dozens of civilians killed over the past four days, echoing a statement issued later that day by UN Secretary-General Ban Ki-moon’s Spokesperson.

“The country seems to be on the verge of total collapse,” High Commissioner Zeid warned, calling on all sides to protect civilians from harm, and to resolve their differences through dialogue rather than through the use of military force. 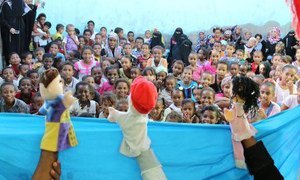 Alarmed by the rising number of child casualties in Yemen, the Special Representative of the United Nations Secretary-General for Children and Armed Conflict, Leila Zerrougui today urged all parties involved in military operations to “avoid creating new risks” for crisis-torn country's children and to adhere to international law.