An inquiry launched in February to determine the facts surrounding a violent demonstration in Gao, Mali, in front of the regional headquarters of the United Nations mission in the country has submitted its report, according to a statement made today by the Secretary-General’s spokesperson.

The inquiry into the violence, which took place on 27 January this year, determined that members of a UN Multidimensional Integrated Stabilisation Mission in Mali (MINUSMA) used unauthorized and excessive force on civilian protesters during the demonstration, resulting in the death by gunfire of three protesters and the wounding of four others.

Additionally, the Inquiry established that some protesters and organizers of the demonstration bear responsibility for the violence of the protest, which included Molotov cocktails, stone throwing and attempts to breach the perimeter of the Regional MINUSMA Headquarters in Gao. It also noted that MINUSMA security forces were left to face protesters on their own in violation of the Status of Forces Agreement with the host country. Five MINUSMA police officers were wounded during the event.

The statement pointed to steps being taken in that regard with the authorities of Mali and the relevant police-contributing country and said the Secretary-General encouraged the Government of Mali to take appropriate steps to prevent future such incidents.

“Communications, management and crisis procedures within MINUSMA will also be examined to prevent the recurrence of such acts,” the statement said, adding that the Secretary-General is committed to ensuring justice for the victims and their families according to local customs and appropriate United Nations procedures.

“MINUSMA is in contact with the local authorities and with the individuals and families concerned in this regard,” the statement said. “On behalf of the United Nations, the Secretary-General expresses his deepest apologies to the victims and their families.”

The statement concluded by noting that the UN, and MINUSMA in particular, remain committed to supporting the stabilisation of Mali. 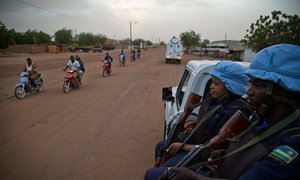 Secretary-General Ban Ki-moon has condemned the deadly protests against a United Nations Stabilization Mission in Mali (MINUSMA) compound in the northern city of Gao, which left several people dead and a number of others injured.