“Profound inequalities, corruption, and resulting marginalization, naturally generate discontent. And the more marginalized and desperate the people, the more likely they are to turn to radical and violent movements,” Zeid Ra’ad Al Hussein, the UN High Commissioner for Human Rights, told the Human Rights Council in Geneva.

In opening remarks to the Council’s 23rd special session, on terrorist attacks, abuses and violations committed by Boko Haram, Mr. Zeid warned that the increasingly appalling atrocities perpetrated by the terrorist group had spawned “a critical human rights situation” in northern Nigeria and the Lake Chad region that could only be tempered through development initiatives.

Since 2009, when the Boko Haram insurgency resorted to wide-scale violence, more than 15,000 people have been killed, countless children, women and men have been abducted, abused and forcibly recruited, and women and girls have been targeted for particularly horrific abuse, including sexual enslavement, the UN rights chief continued.

“This despicable and wanton carnage, which constitutes a clear and urgent menace for development, peace and security, must be stopped,” said Mr. Zeid. “Boko Haram’s leaders must know that they will be held accountable in a court of law for these appalling violations of human rights.”

The terror caused by Boko Haram have also provoked the instability of Nigeria’s north and spilled over the country’s borders, affecting the wider region and displacing over a million people.

According to the UN refugee agency (UNHCR), in fact, the latest movements of refugees across Nigeria’s borders are expected to bring the total of Nigerian refugees in Cameroon to nearly 66,000.

Elsewhere in the region, refugee numbers are also rising. Some 18,000 people have fled to western Chad, including more than 15,000 since early January after Boko Haram’s offensive against the town of Baga in Nigeria’s Borno state. At the same time, more than 100,000 people have already found refuge in Niger despite a steadily deteriorating humanitarian situation and a spike in insurgent attacks against the towns of Bosso and Diffa.

Meanwhile, the UN human rights chief warned that what had begun as a localized crisis in Nigeria was “fast growing to very disturbing regional dimensions,” adding that Boko Haram’s intensified incursions were spreading “bloodshed and desolation even more widely.”

As a result, he said, “strong, coordinated, and principled” responses were critical to stemming the tide of the terrorist group’s hostilities. In recent weeks, in fact, military offensives by Nigeria, Cameroon, Chad and Niger have already led to the recapture of several towns from Boko Haram, prompting some optimism that a reversal in the region’s security situation may be forthcoming.

Nevertheless, Mr. Zeid emphasized the need for a “thorough and clear-sighted consideration of the possible roots of conflict,” suggesting that greater participation in decision-making, improved services, and broader economic, social and political opportunities were elemental to building an inclusive society devoid of the tensions that feed extremism.

“Solutions can never be found if the real dimensions of the problem at hand are denied,” he affirmed.

“Vanquishing this threat to peace will require sustained attention that extends beyond the use of military force. Strengthening the rule of law, repealing discriminatory legislation, and implementing inclusive and non-discriminatory policies must be part of the response to the violations committed by Boko Haram.”

“We must also reflect on some of the possible root causes of this insurgency,” continued Mr. Zeid, strongly encouraging a concerted effort to redress the imbalances so evident in Nigeria’s eastern region, with particular efforts in the territory that has fortunately been recovered from Boko Haram's grasp.

“In this regard, I welcome Nigeria's recent Presidential Initiative for the Northeast, which aims to address longstanding social and economic issues, and to create the context necessary for sustainable recovery and economic development,” he said. 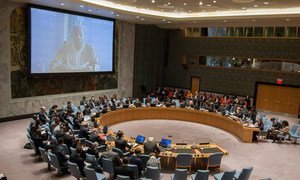 As the Security Council met this morning to discuss threats to international peace and security caused by terrorism, top United Nations officials briefed the 15-member body on the impact of Boko Haram in Nigeria and beyond, warning of the group’s intensified violence and brutality.