Syria: UN warns of humanitarian crisis in Idleb as fighting in city intensifies

UNHCR/J. Tanner
A mother and child crossed into Turkey after fleeing the Syrian town of Idleb.
31 March 2015

The humanitarian situation in conflict-torn Syria is deteriorating even further amid reports that the city of Idleb has fallen to anti-government insurgents, a senior United Nations relief official has warned.

“I am gravely concerned by the ongoing fighting taking place in Idleb governorate and its possible impact on hundreds of thousands of civilians,” Yacoub El Hillo, the UN Humanitarian Coordinator in Syria, declared in a press release.

“I appeal to all parties to this conflict to adhere to their obligations to protect civilians and all humanitarian personnel under International Humanitarian Law and Human Rights Law.”

Last weekend, Idleb, located in northwest Syria, reportedly fell under the control of a coalition of anti-government armed groups, according to the UN Office for the High Commissioner (OHCHR). The city was subsequently shelled by Government airplanes, resulting in the deaths of at least 15 civilians. The Syrian Air Force then expanded its raids throughout the governorate of Idleb, attacking the towns of Sarmin, Mantaf and Nayrab.

At a press briefing in Geneva today, OHCHR confirmed it had received reports of civilian casualties resulting from these attacks but could not yet verify the number of dead and injured.

In his press release yesterday, Mr. El Hillo cautioned that the situation in Idleb had become “increasingly dire” with electricity shortages and the closure of schools and hospitals. In addition, the city’s estimated 500,000 inhabitants remain in the city as fighting intensifies.

“I appeal to all parties to de-escalate hostilities and to allow humanitarian actors to deliver urgently needed life-saving help, which can offer some reprieve from the daily suffering Syrians face,” Mr. El Hillo continued. “While humanitarian actors continue to scale-up assistance, their efforts cannot be a substitute for a political solution to the crisis in Syria.”

Meanwhile, in its briefing today from Geneva, the OHCHR added its concern about threats by armed opposition leaders to attack the predominately Shi’ite villages of Al-Fu’ah and Kafraya.

The reports come as the situation in Syria continues its downwards spiral. Some 12.2 million people, including 5.6 million children, now need humanitarian assistance. By conservative estimates, more than 220,000 Syrians have died in the conflict, but that number is likely much higher. Four out of five Syrians live in poverty and the country has lost nearly four decades of human development, with unemployment at over 50 per cent. Life expectancy has been cut by 20 years. 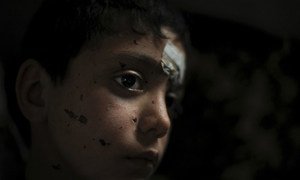 In an expression of solidarity with the millions of children, women and men affected by the devastating conflict in Syria, now in its fifth year, international donors today pledged $3.8 billion at a United Nations-backed conference held in Kuwait.