The United Nations Special Representative of the Secretary-General (SRSG) on Sexual Violence in Conflict, Zainab Hawa Bangura, today called the signing of a landmark declaration by military commanders in the Democratic Republic of the Congo (DRC) a “milestone” on the road to ending conflict related sexual violence.

“This is a day we will all remember as a giant leap forward in the fight against conflict-related sexual violence,” SRSG Bangura said in a statement from the DRC capital of Kinshasa.

“The signing of this declaration by commanders, and the implementation of the FARDC (Armed Forces of the Democratic Republic of Congo) action plan, represent the progress we can make when political will and commitment are coupled with concrete action and support from the international community. The Government and military of DRC should be very proud of this accomplishment,” she emphasized.

Signed by FARDC commanding pledging to combat rape in war, the declaration is seen as an integral step in implementing the national action plan against sexual violence in conflict launched by the armed forces in September 2014.

In Kinshasa, Ms. Bangura joined the FARDC military commanders, key Government leaders including the Ministers of Defence, Justice, Gender, Education and Health, the personal representative of the DRC President on sexual violence and child recruitment, and senior leadership from the UN Organization Mission in the Democratic Republic of the Congo (MONUSCO).

The pledge will be taken by every commander serving in the FARDC and requires military leaders to take a number of important actions, including respecting human rights and international humanitarian law in relation to sexual violence in conflict and taking direct action against sexual violence committed by soldiers under their command.

It aims ensure prosecution of alleged perpetrators of sexual violence under the command of commanders and facilitate access to areas under their command to military prosecutors and handing over perpetrators within their command that are under investigation, have been indicted or convicted.

In addition, it aims to sensitize soldiers under command about the zero tolerance policy on sexual violence in conflict; and take specific measures to ensure protection of victims, witnesses, judicial actors and other stakeholders involved in addressing sexual violence.

In addition to the signing of the declaration, the Minister of Defence also established the Commission that will oversee the implementation of the FARDC’s action plan against sexual violence, and which includes representatives from the military, the Ministries of Justice, Health and Gender, MONUSCO and UN Women. 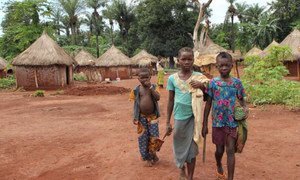 The United Nations refugee agency (UNHCR) has today strongly condemned the recent kidnapping of Congolese refugees by the Lord’s Resistance Army (LRA) in the Democratic Republic of the Congo (DRC), calling for an immediate release of those still in captivity.